Skllet’s John Cooper, who is unvaccinated, recently went on another rant about COVID-19 vaccine mandates. The frontman even took a shot at Rage Against The Machine due to the COVID-19 safety protocols that will be implemented during their reunion tour.

Cooper said the following during an interview with Apologia Radio host Luke Pierson:

“In general, I think, I’m a fairly gracious person, or I try to be, where it’s, like, I really don’t care, Luke, if you get the vaccine or not. And I don’t know if you care if I get it. It doesn’t matter to me. There’s certain things that you can make a choice. But there’s been this collective mind… I mean, people going crazy. I fully expect half the country to be eating grass.

What’s really weird to me is that I’ve been speaking out about my faith in Christ for a long, long time in the mainstream world. Now, let’s be honest — not everybody in the mainstream world is nuts about that. They don’t necessarily love hearing about Jesus, but they have always put up with me — some have supported me even. But I’ll tell you what: the most kickback I have ever received — ever — for my faith has been on my stance on vaccine mandates and mask mandates. It is as if I just — like the unforgivable sin.

I said to my wife, I said the amazing thing that it shows me is that it wasn’t the gospel quote, it wasn’t the gospel of Christ that made them really, really angry — meaning, ‘Jesus is the way, the truth, the life. No one comes to the father unless they come through him.’ A lot of people didn’t love that message, but they can deal with it. But they will not deal with you speaking out against the state. They will not deal with it. And what you’re really witnessing is an actual you’ve spoken against their God. You did not bow down to Nebuchadnezzar’s idol of gold. And it is the one thing you’re not allowed to do. It’s just been really amazing to me.

So a lot the bands, they just don’t know what to do. And when I say ‘they,’ I mean we’re in there too. We just don’t know what to do, because you’re in an entertainment industry that’s largely driven by social media and media at large. And you’re not allowed to speak anything against… I mean, you’ve got Rage Against The Machine telling people that if they don’t get a vaccine… Rage Against The Machine has become the machine. It’s crazy. I’m, like, wait a minute — I’m the revolutionary here? I’m the revolutionary and Rage Against The Machine is just ‘government rock’ now. My older brother made up the term ‘government rock,’ which I find pretty awesome. I think it’s pretty great — it’s a great way to scoff at someone.”

Rage Against The Machine’s Brad Wilk has revealed that recently underwent another knee surgery. The drummer said the following about that:

“Nurses need naps too. Good thing I’ve done this before on the other side. Knee surgery number two this year complete. Torn meniscus again… Let the healing begin. Blood sugars been a bit outa whack for weeks because of it. Excited to be able to get on with some proper playing again soon. 🏃🏻‍♀️💪🏼 🥁 ☀️”

Rage Against The Machine have taken to social media to comment on the recent Kyle Rittenhouse verdict. As you are probably well aware of by now, that teenager was acquitted after murdering two men and injuring another during a protest in Kenosha, WI. The band said the following:

“What defines innocence in America? Tamir Rice was executed by police for playing with a toy. Nobody was charged. Ahmaud Arbery went jogging and was murdered in broad daylight. Kyle Rittenhouse armed himself and killed people who were fighting for racial justice. He claimed self-defense. This is the settler logic of America’s founding myth: whiteness must cast itself as the victim in order to justify its violence against those resisting its oppression. Welcome to the Land of the Free, Home of the Brave.” 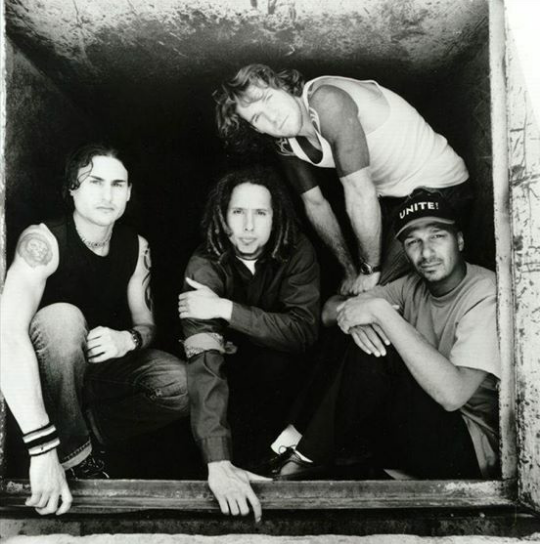 The organizers of the Coachella Valley Music And Arts Festival have updated their safety policy for next year. Proof of COVID-19 vaccination was initially required for the event, but it has now been confirmed that negative COVID-19 tests taken within 72 hours of the festival will be accepted as well. Coachella will take place at the Empire Polo Club in Indio, CA on April 15-17 and April 22-24 and it will feature Rage Against The Machine, Travis Scott, and more.

During a recent interview with The Guardian, Rage Against The Machine’s Tom Morello discussed the treasonous pro-Trump insurrection that took place at the U.S. Capitol on January 6. The guitarist says “we came within a baby’s breath of a fascist coup in this country.”

Morello said the following when asked how he felt about the insurrection:

“We came within a baby’s breath of a fascist coup in this country. Interestingly, one of my dreams has always been to storm the Capitol, but not with a bunch of all-white, rightwing terrorists, you know? The ugliest part about it is how they have co-opted the idea of standing against the Man, at least in the US. There can be no nuanced thinking, like: ‘Yes, big pharma is horrible, but getting a vaccine to save your grandma is good.’ It’s a dumbed-down version of resistance. But I grew up in Trump country [in suburban Illinois], I know people from there. They’re decent people. It’s not their fault for being fucked over by the oligarchy for decades. Now what do we do to find a way to really resist the stuff that is destroying the planet, that’s causing working people’s lives to be worse than their parents’ were? Poverty and hunger kill more people than anything else on the planet and they are human-made problems. Those are the things that we need to be digging into, rather than being sidetracked by this carnival barker bullshit.”

He also added the following when asked about a group of Trump supporters, who sang and danced along to Rage Against The Machine’s “Killing In The Name” during a “Stop The Count” protest in Philadelphia:

“First of all, there’s no accounting for stupidity. There’s a long list of radical left anthems that are misunderstood by bozos who sing them at events like that, from Woody Guthrie’s ‘This Land Is Your Land’ to Bruce Springsteen’s ‘Born in the USA’ to John Lennon’s ‘Imagine’ – those people have really no idea what the hell they’re singing about. The one thing that I speak to in all of those instances is that there’s a power to the music that casts a wide net, and that’s a good thing, not a bad thing. In that net, there will be the far-right bozos, but there will also be people that have never considered the ideas put forward in those songs and are forced to consider those ideas because the rock’n’roll is great. You can either put a beat to a Noam Chomsky lecture – no one wants that, but there’s going to be no mistaking what the content is – or you can make music that’s compelling.”

Rage Against The Machine have taken to social media to issue a statement regarding the crisis at the U.S.-Mexico border. The band says the “repression of migrants and refugees is a bipartisan cause.”

“The racist attacks on Haitian asylum seekers on the US-Mexico border are devastating and cruel. But it’s sadly only the latest chapter in a long history of violent detention and deportation by the United States. Repression of migrants and refugees is a bipartisan cause. Both Democrats and Republicans have continued to wage wars and implement sanctions and destructive economic policies that have been the direct cause of migration and those seeking asylum throughout the world.

Haiti may be the clearest example of this: a country that gained its independence and established a Black republic in 1804, has since had to pay reparations to slave owners and been the victim of centuries of European and U.S intervention up until today. The US-Mexico border is one of the most militarized borders in the world, and the racial and moral panic that it creates shows once again that the US is a nation built on white supremacy, anti-Black racism and Indigenous genocide.

There are over 600,000 undocumented migrants in the US from Canada and other white-majority countries. But they’re not hunted down, targeted and subjected to the same type of moral and racial panic – why is that?”

Rage Against The Machine and Travis Scott have been confirmed as the headliners for the 2022 Coachella Valley Music And Arts Festival. That event will take place at the Empire Polo Club in Indio, CA on April 15-17 and April 22-24. Rage Against The Machine, Travis Scott, and Frank Ocean were previously booked to headline the 2020 edition of the festival, but it ended up getting cancelled due to the coronavirus pandemic. Ocean will be unable to perform at the event next year, so he will be headlining in 2023.

Rage Against The Machine drummer Brad Wilk was scheduled to undergo knee surgery earlier today (May 26). He said the following about that:

Foo Fighters and Rage Against The Machine have been confirmed as the headliners for the 2022 Boston Calling Music Festival. That event will take place at the Harvard Athletic Complex in Boston, MA on May 27-29, 2022. The full lineup, which will feature over 60 artists including another headliner, will be revealed at a later date. Boston Calling Events, LLC (BCE) co-founder and chief executive officer Brian Appel commented:

“We couldn’t be happier to return in 2022 and deliver a full-scale festival with two of the world’s most celebrated rock bands as our headliners. We’ve spent the past year working on a festival that our fans can really look forward to, and we’re so excited to share more news and surprises as we get into next year.”