Poison The Well have cancelled their remaining shows this month due to a positive COVID-19 test within their touring party. The group commented:

“Hey everyone, Unfortunately we will be cancelling the remainder of our December run, including Tid The Season, due to a person in our touring party testing positive for COVID-19. Details about rescheduled dates and refunds will be available in the coming days. We appreciate everyone’s understanding and hope to be back soon. Love, PTW” 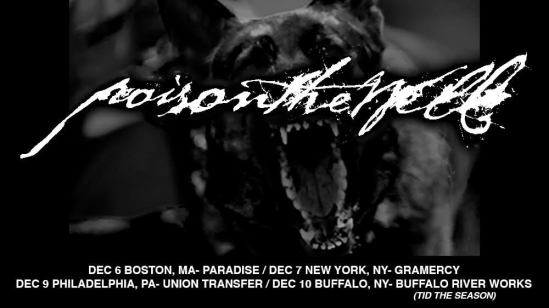 Poison The Well have announced some December East Coast shows. Here’s the dates:

Cult Leader and In The Whale will be joining Poison The Well at their “The Opposite of December… A Season of Separation“ 20th anniversary show. That event will take place at the El Rey Theater in Los Angeles, CA on January 18 and it will find the band performing the album in full.

Poison The Well will be releasing a limited edition 20th anniversary vinyl pressing of “The Opposite of December… A Season of Separation“ next month. The effort, which will be available on blue marble vinyl and transparent blue vinyl, can be pre-ordered HERE and it is expected to ship on January 27.

December 14th “The Opposite of December… A Season of Separation” turned twenty years old. To commemorate and honor our record we’ve put together a special 20th anniversary vinyl limited reissue. This beautiful double gate fold twelve inch comes in a blue swirl vinyl which will be limited to 500 copies which will be first come first serve. All orders after will come in transparent blue. Accompanying the vinyl is a commemorative special booklet that contains rare photos, lyrics and fliers from the 1999 – 2001 era of PTW. In addition we’re offering a special 20th anniversary themed shirt, long sleeve and hoodies. This is online only and will be up for a limited amount of time. Please note that vinyl and merch will ship once the vinyl is finished being manufactured. Estimated shipping date is 1/27/2020. The pre order link to purchase is in our bio!

Poison The Well will be celebrating the 20th anniversary of “The Opposite of December… A Season of Separation“ by performing it in full during a special show at the El Rey Theater in Los Angeles, CA on January 18. Tickets will go on sale this Friday (November 22) HERE. The group commented:

“To commemorate the 20th anniversary of our first LP ‘The Opposite of December… A Season of Separation’ we will be performing the record in it’s entirety + more songs at the El Rey Theater in Los Angeles, California on January 18th, 2020. Please join us in celebrating a record that has been very important for our band. It would mean a lot to us if you did.”

Alan Landsman (ex-Poison The Well/Until The End, etc.) has been sentenced to between 30 months and 72 months in prison for being a co-conspirator in a company that committed mail fraud. The $50 million scheme was “designed to ship unwanted and vastly over-priced light bulbs and cleaning supplies to thousands of businesses and non-profit organizations.”

The company, which was called Midway, was led by a man named Eric Epstein and they would essentially cold-call their victims to get information from people in billing departments. They would then use the info to fraudulently ship items that were invoiced at inflated prices.

Midway also used various shell entities, such as Standard Industries LLC, where Landsman was working as Vice President. The former musician’s sentence will reportedly start on December 5 at Edgefield Satellite Prison Camp. He is expected to be released in early 2020.

“Eric Epstein and his co-conspirators preyed on churches, schools, homeless shelters, and businesses to steal more than $50 million through a sophisticated scheme that involved sham sales of light bulbs and cleaning supplies.

Not only did he not pay taxes on much of the money, but Epstein used the ill-gotten gains to fund a lavish lifestyle including luxury vehicles, a million-dollar home, and extravagant jewelry.

Federal agents and prosecutors will pursue perpetrators of such fraud schemes to recover money stolen from the victims and from the United States Treasury.”

You can read more HERE.