Last night (November 9), Evanescence, Halestorm, and Plush took the stage for a rockin’ evening at the SAP Center in San Jose, CA.

The show kicked off with a killer set from Plush. The young band have been making waves in the rock world and it’s clear to see why. The group’s solid musicianship combined with Moriah Formica’s soaring vocals made for a perfect warmup for the night ahead. Some highlights from their set included “Athena,” “Hate,” and a cover of Heart’s “Barracuda.”

After Plush, it was time for Halestorm to take the stage. The band opened with a thunderous performance of “Back From The Dead” and sustained that energy throughout the whole set. Lzzy Hale’s powerhouse vocals commanded the crowd as the band continued to shred through songs from each of their albums. The group were firing on all cylinders with a full-on presentation of unadulterated hard rock mixed with one ballad, a powerful rendition of “Break In” featuring Evanescence’s Amy Lee. That track served as a highlight from the set alongside “I Get Off,” “Do Not Disturb,” “Freak Like Me,” and “I Miss The Misery.”

When Halestorm wrapped up, it was time for the headliners of the evening, Evanescence. The band were absolutely incredible with Amy Lee’s mesmerizing voice being the main driving force throughout the performance. The group played a majority of their latest album, “The Bitter Truth,” while also making sure to pull out the hits and an enthralling cover of Linkin Park’s “Heavy” featuring Halestorm’s Lzzy Hale. The stellar performance was accompanied by gripping visuals that were displayed through a triangular screen at the center of the stage. Lee also took some time to address the crowd with an emotional speech about the losses many people have suffered throughout the pandemic, while thanking everyone for being there during these strange times. All in all, the whole performance was phenomenal with many highlights including: “Heavy,” “Bring Me To Life,” “Use My Voice,” “Lithium,” “Call Me When You’re Sober,” “Far From Heaven,” and “My Immortal.”

The remaining dates for Evanescence and Halestorm’s fall tour can be found HERE.

Plush have premiered a new song titled “Athena.” This track is from the band’s self-titled debut album, which will be released on October 29. The group commented:

“Our second single “Athena” is FINALLY out! We’re so proud of this song and we truly hope you love it just as much as we do❤️🤘🏼 This song is about love and war: A love so intense that it can be suffocating and result in a war. This theme was so fun to dive into in the studio, and we all hope you feel that energy!” 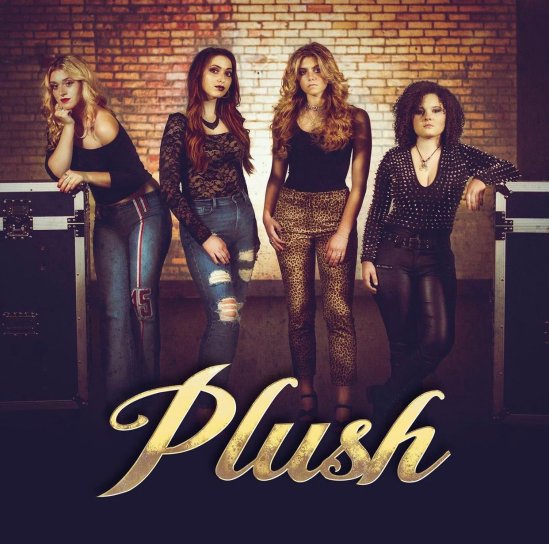 Plush recently performed a cover of Alice In Chains’ “Down In A Hole” as part of SiriusXM’s Octane Next Wave. You can check that out below:

Evanescence and Halestorm have officially revealed the supporting acts for their fall U.S. tour. Plush will open the first leg of the trek, while Lilith Czar will open the second leg. 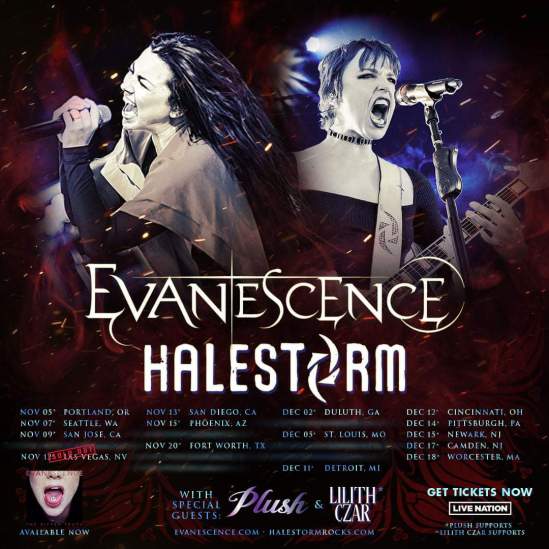 Plush are planning to hit the studio next week to record their debut album with producer Johnny K. The effort is expected to be released this fall and you can find a teaser for it below:

Vocalist/guitarist Moriah Formica told Icon Vs. Icon the following about the album:

“I’m super excited to get into the studio with my bandmates! We have a mix of some heavy songs, as well as some ballads. Can’t wait for everyone to hear the finished product!”

“Recording our own album is a dream come true! Working with Johnny K in the past was an absolute pleasure and I’m so honored to be able to work with him again! Super excited to get into the studio and put out some new music!”

“This journey feels more and more unreal each day, and it’s been an absolute pleasure to work alongside such incredibly talented bandmates. Our first album means so much to each of us, and we hope that it will to everyone else as well.”

“I’m very excited to be working on our first album! I can’t wait to share new music soon!”

More 2021 shows, including a full U.S. tour, will be announced soon. The group will also be taking part in the “Voragos: Destination Lunasea Beach” cruise/festival event, which is set to take place on February 16-21, 2022.

Plush have premiered a new video for their debut single “Hate.” You can check that out below:

Singer/guitarist Moriah Formica said the following about the song:

“It’s about somebody who broke my heart in a very bad way. I was just so angry and sad, but I couldn’t bring myself to actually say ‘I hated you’ to that person, because the truth is I really, really loved that person, and I just hated that I loved them.”

She also added the following about the video:

“It was amazing as a newly formed band to play in a historic theater, especially during a pandemic where we haven’t had the opportunity to play a live show yet. We also had the chance to really bond as a band, spending the whole day together.”