Inter Arma have announced a June European tour. Here’s the dates for that run: 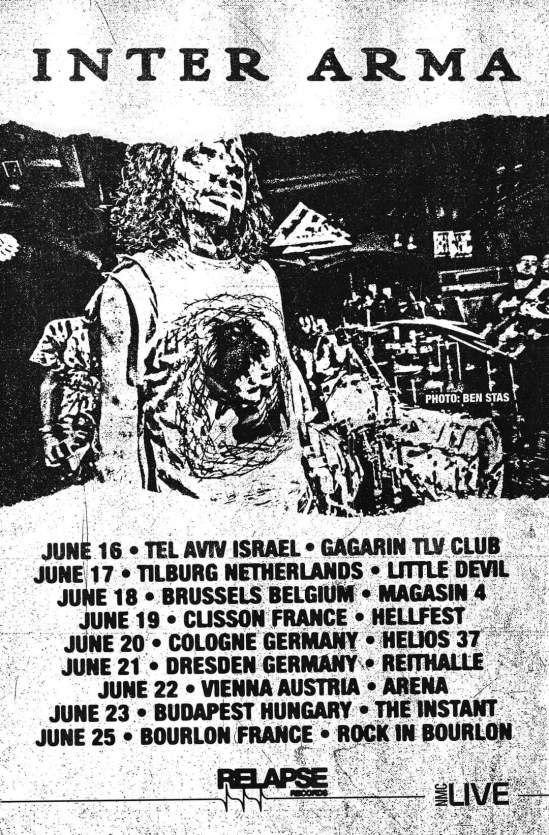 Inter Arma have announced a December tour with Yautja, Eye Flys, and Yashira. Here’s the dates:

Inter Arma and Artificial Brain have announced some East Coast shows together. Here’s the dates:

Inter Arma are streaming a 2020 version of their song “Hallucinatorium.” This version of the track was recorded for Decibel Magazine‘s flexi disc series.

Inter Arma have released their cover of Prince’s “Purple Rain.” This track will appear on the band’s new covers album, “Garbers Days Revisited,” which is set to be released on July 10.

“This was never meant to be heard publicly. It was meant to be outrageous- to be played late at night while laughing and drinking beer with our friends. Because that’s what this is: Inter Arma covering the greatest pop song of the 1980s, and arguably of all time, by Prince, who HATED when people covered his music.

The vocals were done in one take by the drummer and not pitch-corrected, because who else can sing like that? Prince. So we opted to stay honest and simple because we never thought that the general public would hear it. Once Relapse heard it there was a little bit of back and forth between the two camps and it was decided, reluctantly, to be included on the record.

We hope everyone enjoys this and gets a little bit of a chuckle because I think we could all use that right about now. Stay safe, stay outrageous, BLM.”

Inter Arma have released their cover of Nine Inch Nails’ “March Of The Pigs.” This track will appear on the band’s new covers album, “Garbers Days Revisited,” which is set to be released on July 10.

“Hi. We released our cover of Nine Inch Nails’ ‘March of the Pigs‘ this past Tuesday, but felt it would have been inappropriate to latch onto the outrage we’re all experiencing to promote a cover album, even if by happenstance.

If you want to hear it, it’s out there. In the meantime, we suggest that you continue to fight against police brutality and institutionalized racism however you can. It’s working.

If you’ve got the means, please consider giving a few or a lot of dollars to the Richmond Community Bail Fund and/or BEAM (Black Emotional And Mental Health). Links below. Black Lives Matter.

Inter Arma will be releasing a new covers album titled “Garbers Days Revisited” on July 10. The effort’s first single, a cover of Neil Young‘s “Southern Man,“ can be found below:

T.J. Childers said the following about the record:

“Hunter Thompson used to punch out pages of Ernest Hemingway on his typewriter just to get the feeling of what it was like to write that way. The same can be said for anyone learning a great cover song: there’s a lot to be deduced from the information there. Actually learning the songs can lead to inspirational, new musical ideas.”

“Covers have been an integral part of Inter Arma since the beginning of the band and some of these songs have a direct lineage while others are a little more… obscure. As timing would have it, we hope this provides a bit of an escape for listeners, given the surreal circumstances we’re in at the moment, because after all, great art should provide an escape which is part of why we chose to do this: sometimes you just wanna be runnin’ down a dream…”

The band also added the following about “Southern Man”:

“Inter Arma as a whole are massive Neil Young fans. ‘Southern Man’‘has been a staple of our live set for over a decade and we finally got around to putting it to tape. We hope you enjoy our spin on this timeless and still extremely relevant song.” 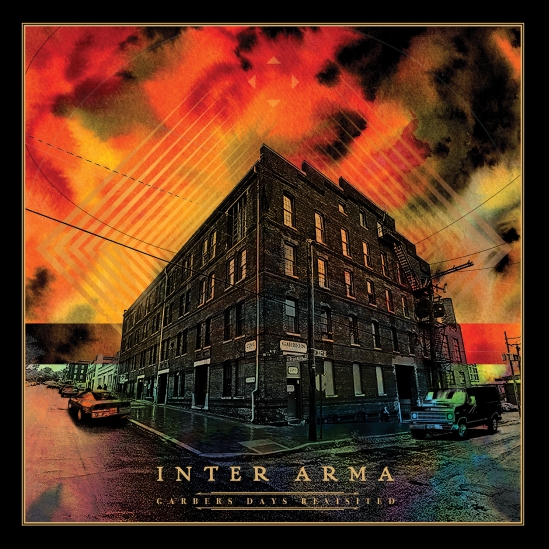 Inter Arma have released a new live EP, titled “Live At Club Congress,” via Bandcamp. The effort was recorded during the band’s August 24, 2017 show at Club Congress in Tucson, AZ and 100% of the proceeds from it will go towards Direct Relief to support COVID-19 relief efforts.

Inter Arma have announced some February shows. Here’s the dates: 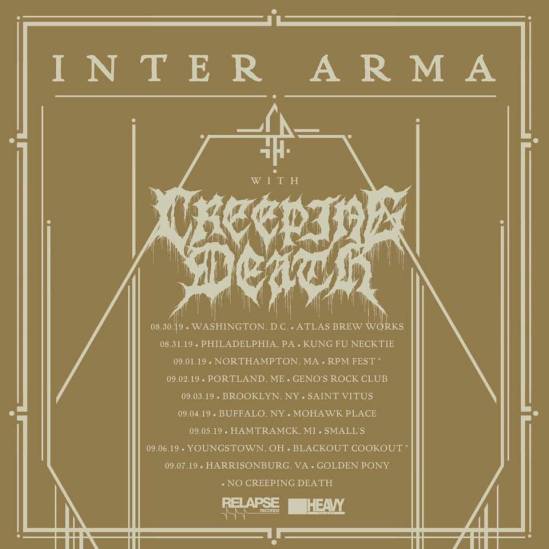