During a recent appearance on the “Vulgar Display Of Podcast,” Dredg’s Drew Roulette offered an update on the band’s new album. According to him, the group may enter the studio this winter to work on the effort.

“We’ve been obviously writing for the last five-plus years, and we get together every week to do that. It’s been awesome, but it’s getting to the point where we just have too many songs. It’s like, every time we get in there we wanna write something new, you know? But actually working on the songs is actually work, right? None of us wanna work. We just wanna get in there and jam because it sounds good and it’s easy.”

“So you know, working on that. We’re supposed to do an international tour next year but we kinda had to postpone that. We made the decision recently, just because we don’t want it to get in the way of the record. Which is good news for me because that’s what I’m most interested in. I’m thinking we’ll write until the end of the year and maybe get in the studio this winter, or maybe early next year.”

Dredg have shared some behind the scenes footage from the making of their 1998 album “Leitmotif.” You can check that out below:

During an appearance on theFIVE10 Podcast, Dredg bassist Drew Roulette talked a bit about the band’s next album. According to him, the effort will have “more aggression.”

Roulette said the following [via The PRP]:

“The last record we did, ‘Chuckles And Mr. Squeezy‘ with Dan The Automator, was more electronically focused. And it didn’t seem [to capture] as much of the full potential of our rock personality. So no matter, what the record sounds like—the new one—it’s gonna feel like it’s more dredg again because of that… But at the same time, one thing that we’re also doing which has been really exciting is taking some old songs that we never finished, even from the “El Cielo” era.

Or, the other day I found this video clip of Dino playing this awesome beat in Studio 880 in Oakland in 1999; I brought that to the jam room and just played it and Mark [Engles, guitar] and I jammed to him, he wasn’t even there, but we’re just jamming to this beat that was written 20 years ago. So it’s this weird amalgamation of the past and the present that’s creating this new music. So that’s unique.”

“It’s exciting to get in there and just fuckin’ slam on the drums and make loud fuckin’ music and we love it and we’ve been doing that. So it’s gonna be a lot of that, more aggression.”

Roulette went on to say that the band were sitting on about 20 demos and that they had about 40 new song ideas. For now, the group are continuing the writing process.

In other news, Dredg are also working on an audio visual scrapbook featuring footage, photos, etc. from their career.

dredg have shared footage from their May 13, 2010 show at The Catalyst in Santa Cruz, CA. The video was directed by Mohammad Gorjestan and it can be seen below. On another note, the band are also asking fans to sign a petition to get the NMSDC to acknowledge Middle Eastern and North African owned businesses as minority owned.

Dredg’s 2006 live album, “Live At The Fillmore,“ will be receiving a vinyl release on October 30. The effort was recorded during the band’s May 11, 2006 show at The Fillmore in San Francisco, California and it can be pre-ordered HERE. 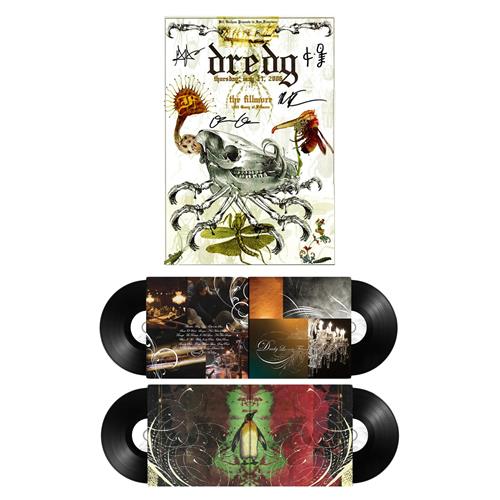 It looks like Dredg have a number of things planned for 2019. In a new update, the band revealed that they will be releasing a new album and a new box set/scrap book next year. On top of that, they are also putting together a tour and a yard sale.