Deicide have launched their own brand of hot sauce called “Devil’s Dick.” You can purchase a single bottle HERE or a merch bundle HERE.

It looks like there is still bad blood between ex-Deicide guitarist Eric Hoffman and vocalist Glen Benton. Hoffman recently went on a bit of a Facebook rant, calling Benton a “scum fuck.”

“If I deicide/AMON Eric Hoffman stop death metal, it was lack of support. Last AMON album released was out of my own pocket.. I will collect what has been rightfully owned and that scum fuck Glen and the Turtles, they only care about themselves.

I will never stop death metal and yes we will kick your ass Glen any time any place. I will collect my money clearly fraud scum fuck.

You say gloves are off your better put some on, the anger in me, your head will spin around like the fucking exorcist, you know where I live, welcome anytime collecting all my merch for royalties for 20 years and royalties for 13 on scars believe me I will not let you get away with this, we will meet again, anger is building and has it’s vengeance.

Yes again he was hired I drew the logo found the name. that’s why I use his name AMON. fucking prick.”

Last year, Benton commented on his and Hoffman’s relationship during an appearance on the Into The Combine Podcast:

“Every time we do a record, I guess [Eric] loses his mind over there and he can’t handle hearing us proceeding without them. It’s been what — 14, 15 years since those two departed, and they did one shitty album and tried ripping off the fans, charged them for videos and bullshit like that.

When you don’t have the original singer, then you are the official cover band. You wanna make yourself look even more stupid than you already do, by all means, go ahead.”

Deicide have officially revealed the dates for their spring North American tour. As previously reported, the trek will also feature Origin, Jungle Rot, and The Absence. 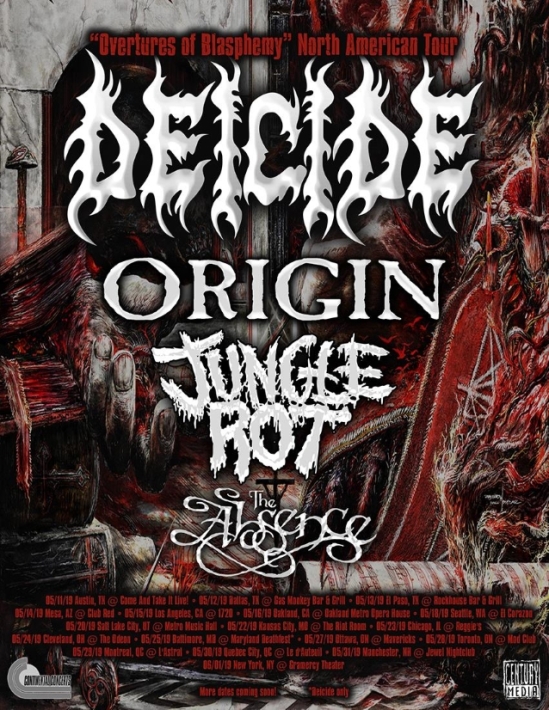 Deicide have revealed that they are planning a North American tour with Origin, Jungle Rot, and The Absence. Dates and venues are expected to be revealed soon.

Deicide have welcomed Chris Cannella (Autumn’s End) to the band as their new guitarist. He will be replacing Mark English in the group.

“When a band has been together for 30 years, change is inevitable. So with that said, we had to make that change. Our long time friend from Arizona, Chris Cannella recently started spending a lot of time in Florida for work. Immediately we began hanging out. We realized he was the missing piece of the puzzle. Together we are a musical match. We all work together and get along as if Chris has been in the band since it’s inception. Cannella has the experience of being a veteran in the industry as well as a guitar clinician across the globe-who lives and loves Metal! So please, let’s all welcome Chris Cannella as the official new guitar player of DEICIDE! We want to thank Mark English for stepping in during this transitional period. We will be seeing all of you across the world bringing our music to you more brutally than ever!”

Deicide have announced some headlining Florida shows. Here’s the dates: 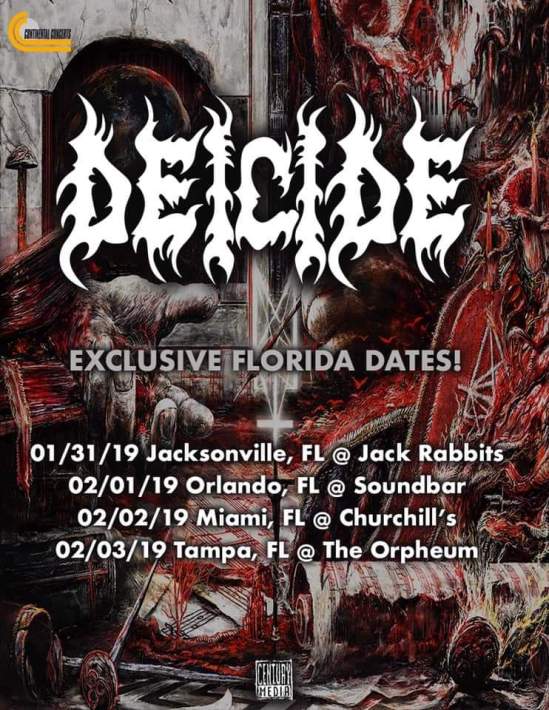 Deicide have shared a behind the scenes look at their recent video for “Defying The Sacred.” You can check that out below. The track appears on the band’s latest album “Overtures Of Blasphemy.”

Deicide have premiered a new video for their song “Defying The Sacred.” This track is from the band’s new album “Overtures Of Blasphemy,” which was released today (September 14).

Deicide have premiered a new song titled “Seal The Tomb Below.” This track is from the band’s new album “Overtures Of Blasphemy,” which will be released on September 14.

Deicide have premiered a lyric video for their new song “Excommunicated.” This track is from the band’s new album “Overtures Of Blasphemy,” which will be released on September 14. 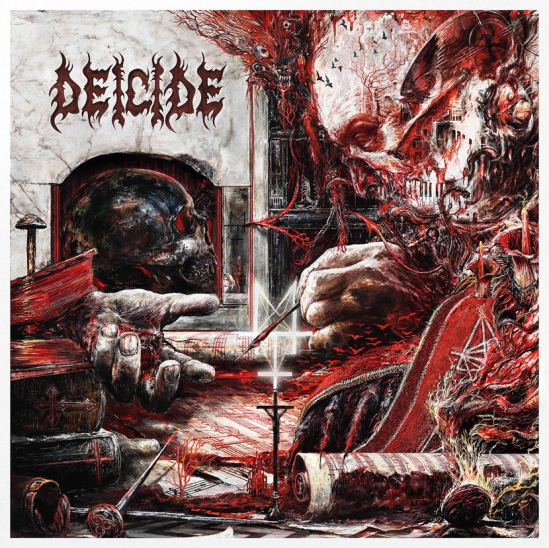