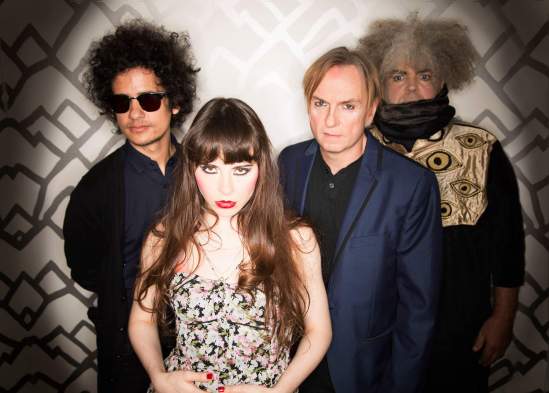 “Panic attacks are man’s worst enemy but our most powerful mental invention, somehow we’ve managed to use them to calm our nerves down and let the music flow. Sometimes the agony within the self makes it appropriate to let the jittery hands do the story telling.”

“It was so much fun to write this song with Buzz, Omar and Dale. It literally just came out like a flying saucer while we were working the parts out for Chiseler. That same day we recorded everything. It was so impressive to see how well we all experiment with one another. While writing the lyrics for this one, I completely let my hand do the story telling… the unconscious is sometimes wiser than our premeditated thoughts.”

Melvins’ Buzz “King Buzzo” Osborne and Dale Crover have joined forces with Omar Rodriguez-Lopez (At The Drive-In, ex-The Mars Volta, etc.), and Teri Gender Bender (Le Butcherettes, etc.) in a new band called Crystal Fairy. The band plan to release a 7″ single titled “Necklace Of Divorce” later this month. The single will come with the title track and another song titled “Drugs On The Bus“ (listen below) on the b-side. The band’s debut album will be available on February 24.