The following was said about the book:

“If you ever doodled the logo of your favourite band on the back of your exercise book at school, or you spent hours on end staring at every detail of your favourite vinyl album cover….then this is for you. Rock N’ Roll Colouring is proud to present for the first time officially endorsed colouring books from one of Shock Rock’s greatest acts – Alice Cooper.

Featuring iconic artwork from classic albums and other instantly recognizable images, all printed on high quality paper, in a square format, fully endorsed and officially licenced, these killer designs have the potential for hours of satisfying colouring in. Each book allow you to raise the horns in celebration of rock’s most legendary and important bands, letting your imagination run riot as you create your own personalised versions of your favourite designs.

Each book contains painstakingly created renderings of each image, with beautifully detailed outlines ready for you to unleash your artistic skills using pens, pencils or paint. Let your imagination run wild and add your own interpretation of these classic images, or simply recreate them as closely as you can to the originals. Whatever you decide, the satisfaction of adding your personal touch to these classic designs is extremely rewarding.

Devised and created by two life long rock and heavy metal devotees and colouring book fans, Rock N’ Roll Colouring was formed by fans, for fans. Every effort has gone into making sure these books do justice to the legacy of Alice Cooper, and give fans another reason to enjoy some of the most beautiful and creative artwork from the bands. And not only that Colouring has proven significant mental health benefits including mindfulness, relaxation and increased focus, and can be enjoyed by any age group. These books provide hours of creative and restful activity that combines a love of the music with a love of the art.”

Alice Cooper has announced a fall U.S. tour. The frontman will also be joined by special guest Ace Frehley. 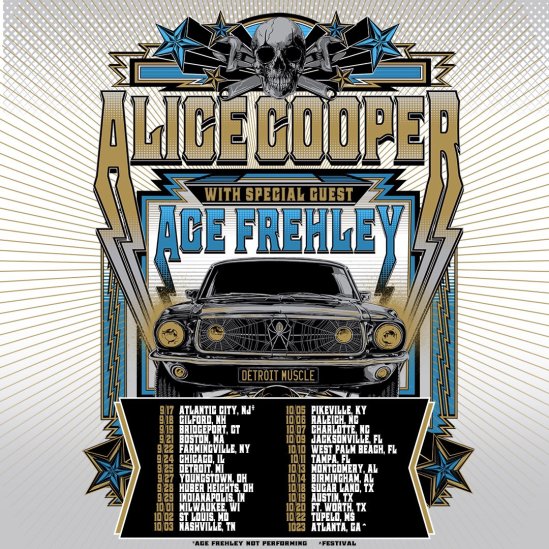 During a recent interview with AZ Central, Alice Cooper discussed his and his wife’s battles with COVID-19. The couple contracted the disease last December and have since been vaccinated. Cooper said the following:

“We were wiped out. We didn’t have to go to the hospital or anything like that. But I lost 15 pounds. I couldn’t sleep. I couldn’t eat. Now, I’m feeling pretty good. I’m feeling like I’m at least 95%.”

After his initial sickness, the frontman slowly got better:

“Every day you feel two percent better. Then you get a little bit better, the next day a little bit better, until finally, you’re going, ‘Oh, wait a minute, I feel almost normal now.’ But it does take it out of you. I mean, it’s like pneumonia. It takes a while to get your sea legs back under you.”

Alice Cooper has shared a sampler featuring previews of all the songs on his new album “Detroit Stories.” That effort will be released on February 26.

According to AZCentral, Alice Cooper and his wife Sheryl recently received COVID-19 vaccines in Phoenix, AZ. The singer says that the two already had the disease, “but [they] got vaccinated anyway.” The couple were volunteering with the Maricopa County Department of Public Health Medical Reserve Corps when they got their shots. Team Rubicon, a nonprofit organization that pairs military veterans with first responders, was on hand to help out and their Phoenix Communications Coordinator Rich Mogull commented:

“It was great. The Coopers showed up and none of these volunteers knew they were going to be there. They got autographs and got to talk to Alice and his wife.”

“Everybody out here’s been really nice. You don’t feel like you are in danger of anything.”

Alice Cooper has premiered a new video for his new song “Social Debris.” This track is from his new album “Detroit Stories,” which will be released on February 26. Cooper commented:

Alice Cooper has written a new song for Zak Nilsson, the son of late musician Harry Nilsson. Zak is currently suffering from end-stage colon cancer and Cooper tried to lift his spirits by singing him the track during an episode of “Coffee Talk With Adika Live.” That series is hosted by Zak’s friends, bassist Stefan Adika and music journalist Corey Levitan, who invited him on the show to discuss his battle with cancer before surprising him with the performance from Cooper.

Alice Cooper has premiered a new song titled “Our Love Will Change The World.” This track is from his new album “Detroit Stories,” which will be released on February 26. Cooper said the following about the song:

“I think ‘Our Love Will Change The World’ is one of the oddest songs I’ve ever done, and it was one that came to us by somebody else, another Detroit writer. And it was so strange, because it was happy and what it was saying was anything but happy — it was simply a great juxtaposition. And I got it immediately and said, ‘Okay, this is going to be great.’ The music saying one thing and the lyrics saying something else, I love that song. It is totally different from anything else on the album.”

Cooper discussed how the city of Detroit influenced the record:

“Detroit was heavy rock central then. You’d play the Eastown and it would be Alice Cooper, Ted Nugent, The Stooges and The Who, for $4! The next weekend at the Grande it was MC5, Brownsville Station and Fleetwood Mac, or Savoy Brown or the Small Faces. You couldn’t be a soft-rock band or you’d get your ass kicked.

Los Angeles had its sound with The Doors, Love and Buffalo Springfield. San Francisco had the Grateful Dead and Jefferson Airplane. New York had The Rascals and The Velvet Underground. But Detroit was the birthplace of angry hard rock. After not fitting in anywhere in the U.S. (musically or image wise) Detroit was the only place that recognized the Alice Cooper guitar-driven hard rock sound and our crazy stage show. Detroit was a haven for the outcasts. And when they found out I was born in East Detroit… we were home.”

“We recorded with Wayne Kramer (guitarist and writer from the MC5), Johnny “Bee” Badanjek (drums; from the legendary Detroit Wheels), Paul Randolph (legendary Detroit jazz and R&B bassist) as well as the Motor City Horns and other local musicians. We had musical ideas and encouragement from John Varvatos, the support of the folks at Shinola, and we recorded at Rustbelt Studios in Royal Oak. This was made in Detroit for Detroit by Detroit denizens!”

“Detroit Stories” will be available on CD, CD+DVD digipak, vinyl, and as a box set. Notably the box set will include a CD, a Blu-ray featuring Cooper’s “A Paranormal Evening At The Olympia Paris” performance, a shirt, a face mask, a torch light, and three stickers.