“Hey everyone… If there is one thing that I NEVER, ever want to do, it’s cancel a show ESPECIALLY in Philadelphia… I know that there is speculation online that I might have tested positive for Covid-19… That is NOT the case. I have tested multiple times, and I am negative. I have a combination of strep throat, and a pretty gnarly sinus infection, and as much as I hate to admit this I would not be able to give you my 100% tonight. To everyone @933wmmr and @pierrerobertwmmr I promise I will make it up to you somehow in the very near future. This is not something that Myself nor @zmyersofficial takes lightly. We love you Philly, and like I said I promise I will make it up to you All. Much Love, and Respect ❤️ All refunds will be processed automatically. Thank you to everyone for understanding”

Smith & Myers, the project featuring Shinedown’s Brent Smith and Zach Myers, have premiered a new video for their song “Bad At Love.” This track is from the band’s latest album “Volume 2.”

Smith & Myers, the project featuring Shinedown’s Brent Smith and Zach Myers, have announced a May acoustic tour. Here’s the dates:

“We are excited to announce that we’re safely hitting the road this May! We feel extremely fortunate to have the opportunity to play live for you in a socially distanced and safe environment. We’ll perform songs from our double album, acoustic renditions of your favorite Shinedown hits + more.” 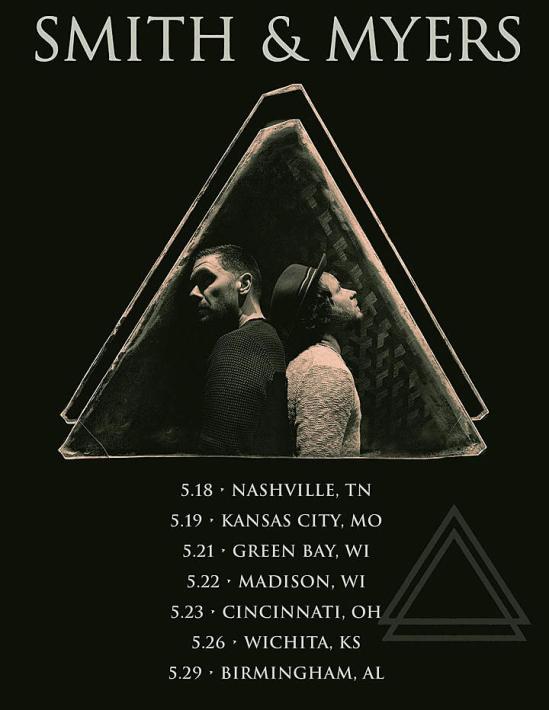 Smith & Myers, the project featuring Shinedown’s Brent Smith and Zach Myers, have premiered a new video for their song “One More Time.” This track is from the band’s new album “Volume 2,” which was released today (October 23). That effort follows “Volume 1,” which was released earlier this month.

Smith & Myers, the project featuring Shinedown’s Brent Smith and Zach Myers, have premiered a new video for their song “Panic.” This track is from the band’s new album “Volume 1,” which was released on October 9. The effort will be followed by “Volume 2” on October 23.

Smith & Myers, the project featuring Shinedown’s Brent Smith and Zach Myers, have premiered a new video for their cover of Billie Eilish’s “Bad Guy.” That track is from the duo’s new album “Volume 2,” which will be released on October 23. That effort will follow the release of “Volume 1” on October 9.

Smith & Myers, the project featuring Shinedown’s Brent Smith and Zach Myers, previously announced that they will be releasing a new album, titled “Volume 1,” on October 9 and now it looks like more new music is on the way. The duo have now confirmed that they will be releasing another album, titled “Volume 2,” on October 23. The first two tracks from that effort, “Bad At Love” and a cover of Billie Eilish’s “Bad Guy,” can be found below:

“‘Bad At Love’ was one of the very first original songs to be written for the project. I think ultimately the song was born from my own romantic relationships. When I love someone, I love them fully, and sometimes the passion can be too much. I always know when it’s time to move on. That being said, I am extremely grateful that I am still very good friends with the ladies I have loved, and still love, to this day.”

“‘Bad At Love’ was one of the first original songs we wrote for this album … Lyrically, Brent was writing about things in his life that maybe we wouldn’t really touch on with Shinedown and I think it came out to be an incredibly naked and honest song. And I think ‘Bad Guy’ turned out very cool — it’s a nice bluesy version of the song.”

Shinedown’s Brent Smith and Zach Myers will be releasing a new album from their Smith & Myers project on October 9. The effort is simply titled “Volume 1” and the first two tracks from it, “Not Mad Enough” and a cover of Neil Young’s “Rockin’ In The Free World,” can be found below:

Smith said the following about the new record:

“We’ve spent a great deal of time and energy making sure this project is completely authentic. The main reason Smith & Myers exists has to do with the fans. A project that was born from multiple requests over the years has now evolved into its true identity. Make no mistake – it’s about the songs, it’s about the story, and above all it’s about the message.”

“It was an odd time to make a record at the beginning of a global pandemic, but the state of the world is reflected in the art we made on this album. It was some of the most creative times I’ve ever had as a musician or a songwriter. For the covers, we felt that we should approach them as a duo as if we had written the song modern day. With the originals, Brent and I had never discussed some of this subject matter before and we dug so deep while also touching on a world that’s rapidly changing around us the last eight months. We felt it would be disingenuous not to touch on social issues we ALL face as humans. We put a lot into this album and we truly hope you enjoy listening to it.”

Shinedown’s Brent Smith and Zach Myers have officially finished their new Smith & Myers album. The effort, which is currently being mastered, will feature 10 original songs and 10 covers.

Smith told 104.9 The X the following about the record:

“It’s not just every song on acoustic and a vocal. There’s a bit instrumentation that’s going into this. Also, it’s a double album. So it’s 10 covers that were really picked by the audience. We allowed the audience to submit as many songs as they would like to hear me and Zach perform. Because if you go back to 2014, we did the first SMITH & MYERS, but that was for the fans. We did these two EPs, five songs apiece. They were cover songs that the audience picked. And we put it out, and, honestly, we never really thought anything from it, when we released it, but there was such a demand for it that we decided to give it a shot and try to tour it and see if anybody would come out. To our shock, a lot of people came out. And so we decided with this project that we were gonna go for it and kind of go a bit more in-depth with it.”

“So there’s 10 original SMITH & MYERS songs for the very first time, and then another batch of 10 songs that were really submitted by the audience that we looked at the percentages of everything and we picked the 10 that we felt like people really wanted to hear. And we’re in the mastering process of it right now. We’re in the home stretch of getting it prepared for the audience and for the world, and you’re gonna see some brand new news to come very, very shortly about when that’s gonna be coming out.”