Sleeping Giant have released their farewell documentary and it is available to watch below. The band commented:

“It was a long process to make this film from getting footage, making time for interviews, and editing it all together. We’re insanely proud of this and hope you all enjoy this hour long film. It covers how certain songs came to be, how the band was formed, what we’ll miss most, experiences playing the songs, and what we’ll miss most about the band being done.”

Sleeping Giant have premiered a new video for their song “Preachcore Lives!.” This track appears on the group’s final album “I Am.” The clip was filmed during their February 17, 2018 farewell show at the Chain Reaction in Anaheim, CA. In other news, the band are also planning to release a documentary with more footage from their farewell shows this summer.

Sleeping Giant have premiered a new song titled “Preachcore Lives!.” This track is from the band’s final album “I Am,” which will be released on January 26, via Facedown Records.

Sleeping Giant’s final show, which is set to take place at Glasshouse in Pomona, CA on February 17, is now sold out, so the band have decided to play another concert at the Chain Reaction in Anaheim, CA the day before (February 16). Advent, Crow Killer, and Iron Curtain will serve as support at both shows. Aside from this, the band also have a January 28 show scheduled at Trees in Dallas, TX. Nothing Left, Lost In Seperation, Fever Youth, and Threnody will open on that date. The band’s final album “I Am” will be available on January 26. 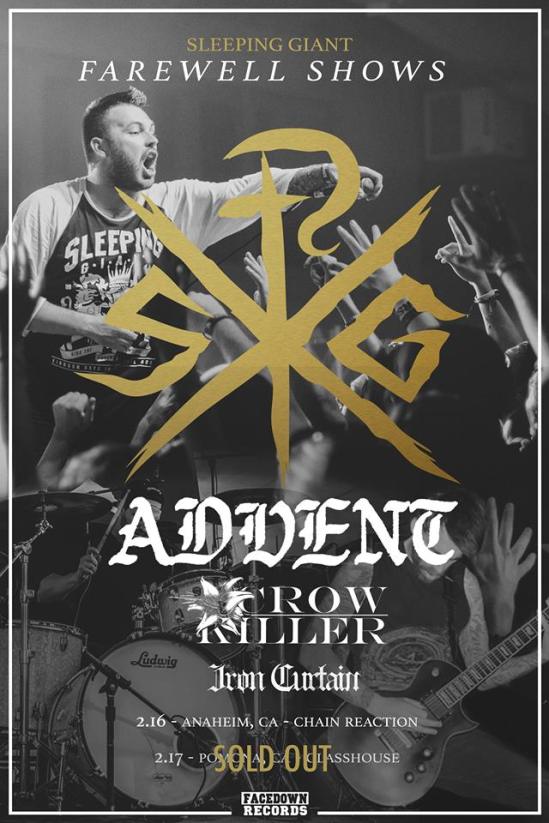 Sleeping Giant have premiered a lyric video for their new song “Lantern” feat. Bruce LePage (100 Demons). This track is from the band’s final album “I Am,” which will be released on January 26, via Facedown Records.

Sleeping Giant have premiered a new song titled “No Love” feat. Silent Planet‘s Garrett Russell. This track is from the band’s final album “I Am,” which will be released on January 26, via Facedown Records. With this news, the group have also announced a couple of farewell shows:

Tommy Green commented on the band’s plans to call it quits:

“For me personally this band has been such an important and special gift for my actual life that I needed to know that I was actually at a point where I could let go and move on. I didn’t want to feel grief like there was something unexpressed unsaid or undone in me. This band has become the public/private journal of my story or my life.

It is one of the most important things I have ever done in my life. It’s crazy, beautiful, hard, awesome, cathartic, creative and mission all at the same time. In regards to this being a thought out deliberate decision to make I AM The final Project, for myself I am at a point where I feel like I have crossed some significant finish lines in my journey and things have come full circle.

At Facedown Fest 2016 we talked to JD and asked him if he would consider helping us to say goodbye. We wanted to finish where we started and show respect and honor for the label that helped us get our first exposure and created space for us to grow at home in Southern California. Stepping away from Facedown and becoming a traveling band and working with so many others, it became evident that there is something really special about Facedown; honestly this is just such a gift for the FD crew to be willing to take this on as a last project.

Our last show will be 12 years to the date of our first show back home. I couldn’t and wouldn’t have done this, risked speaking and sharing my personal story without all the people that have made this band. Respect for your sacrifices and for your gifts and talents and efforts. You are all a part of Sleeping Giant.”