Opeth will be releasing half-speed vinyl pressings of “Orchid,“ “Morningrise,” and “My Arms, Your Hearse” on May 19. The band said the following about that:

“Today we announce the Abbey Road half-speed vinyl re-issues of Opeth’s first three albums ‘Orchid’, ‘Morningrise’ and ‘My Arms, Your Hearse’ with Candlelight Records. These coloured 140g re-issues have been lovingly re-mastered by Jens Bogren with guidance from Mikael. The records have been cut at half-speed at the infamous Abbey Road Studios by Miles Showell, and all artwork carefully restored by Dan Capp; designed the way they were originally intended. Out May 19th. Early pre-orders available now exclusively on www.omerch.com/shop/opeth“

Opeth have officially welcomed drummer Waltteri Väyrynen (ex-Paradise Lost) to the band. He will be replacing Martin Axenrot, who exited the group last year.

“We are pleased to announce that the new drummer in Opeth is no other than Waltteri Väyrynen (Paradise Lost, Bloodbath, Bodom After Midnight). Walt will take on his duties effective immediately and will play his first show with the band in Tallinn/Estonia on September 14, 2022. He will replace stand-in drummer Sami Karppinen who has been the temporary replacement for Martin Axenrot since the fall of 2021.

The band are currently in rehearsals for the upcoming tour.”

”We just had our first rehearsal with Walt yesterday and it went incredibly well! We were all very nervous beforehand, but Waltteri completely killed it! Pure delivery! We went through 16 songs (!) from start to finish and didn’t have a single correctional comment.

It’s quite remarkable! I was astounded, and so were the rest of the band. He has everything, really. From the required laid-back sensitivity an Opeth drummer needs, via the classic rock, prog rock, metal grooves and onwards to downright mega-intricate technical virtuosity.

On top of that, he knows the songs extremely well (already) both from the recorded versions as well as the sometimes modified live versions. We were hearing drum rolls and beats that we hadn’t heard since the songs were recorded. The audience is certainly up for plenty of air-drum moments connected to their favourite Opeth songs. Walt has got it down, to put it mildly.

On top of everything, Waltteri is an awesome bloke. Genuine. Super nice. Funny. And young! He was born the same year we recorded our debut album, ”Orchid”. Imagine that!

We very much look forward to going on the road together with him. Create new music together. Play all over the world. And to provide a musical future together with us. This is no small feat for a band 32 years of age. I’m very, very excited about him joining us, and I hope that our audience will embrace him with open arms.

I’d also want to take this opportunity to thank Sami for saving our asses when we most needed saving. If it hadn’t been for his efforts, friendship and care we’d probably been ”on ice” as we speak. We’re furthermore happy to keep Sami as part of the Opeth family. His contribution to Opeth is beyond words, and he’ll continue to help make our performances as good as possible. From the bottom of our hearts, thank you, Sami!

It appears Martin “Axe” Axenrot’s departure from Opeth was related to his refusal to get vaccinated for COVID-19. The news was confirmed by Paradise Lost vocalist Nick Holmes, who performs with the drummer in Bloodbath.

Holmes told Blabbermouth the following when asked about Axenrot’s current status in Bloodbath:

“He’s still in the band as far as I’m aware. I haven’t seen him for three years, maybe more. Waltteri’s [Väyrynen, PARADISE LOST] been playing drums with BLOODBATH more than Axe has in the last couple of years.”

“I mean, [Martin] was working with OPETH prior to the pandemic, so he decided to take a backseat to the live shows and Waltteri did the [BLOODBATH] live shows ever since. He’s still in [BLOODBATH]. The whole pandemic — he didn’t want to get the vaccine, so that caused issues with travel and touring with OPETH when they started to go out again six months ago. That caused them issues there. It’s come over to BLOODBATH for sure.”

Voivod have been added to Opeth’s upcoming European/UK tour. Here’s the dates for that run:

Mikael Åkerfeldt (Opeth) has created the soundtrack for Netflix’s “Clark.” That six-episode series was directed by Jonas Åkerlund (“Lords Of Chaos”, etc.) and it stars Bill Skarsgård (“It”, “Castle Rock”) as Swedish criminal Clark Olofsson. Fans can watch the show now and stream the soundtrack on the service of their choice HERE. Physical copies will also be available on July 22.

“Writing the music for ‘Clark‘ is probably one of the most rewarding things I’ve done musically. It was so fun. Challenging but fun. I wanted to do a good job, of course, and provide music that would fit with the rather bizarre tale of Clark Olofsson. I had to conjure up a sound for him. His sound. It’s all in my head, I guess, but it felt like I was on to something after having finished the first track. The immediate feedback from Jonas Åkerlund was almost overly positive. So I just took it from there.

During the pandemic, I wrote so much music for this project, but I like to think I didn’t stray too much from the ‘original sound of Clark.’ The finished soundtrack record is a downright wish-mash of musical styles. Some sounds I’m familiar with. Other sounds were brand new to me. Or old, depending on how you see it. Brand ‘old’?

The album doesn’t really make musical sense at all, and that’s pretty much the purpose. Writing music to portray the multi-faceted story of a man like Clark Olofsson was bound to generate some type of musical insanity. It (the music) is just all over the place. Oddly enough, so is my own personal taste in music.

Even if many would deem Clark ‘a man insane,’ it really helped me in my work. No boundaries (let’s cross them). No rules (let’s break them). Anything goes…”

Notably, several metal musicians also appear in the series including Åkerfeldt, Tobias Forge (Ghost) and Myrkur. You can find a trailer and some footage of Forge and Myrkur’s parts below:

Opeth will be releasing an extended edition of their latest album, “In Cauda Venenum,” on May 13. The effort will include the English and Swedish versions of record, new illustrations by Travis Smith, and a CD of bonus tracks. Those songs include: “The Mob” / “Pöbeln,” “Width Of A Circle” / “Cirkelns Riktning,” and “Freedom & Tyranny” / “Frihet & Tyranni.” If you missed it, you can stream “Width Of A Circle” HERE. Furthermore, the “Connoisseur Edition” vinyl box set version of “In Cauda Venenum” will be made available in North American retail stores for the first time on May 13 as well. Both album editions will also be available at the band’s merch table on their North American tour.

Opeth have digitally released their song “Width Of A Circle.“ The track was previously only available on an EP that was included in the “Connoisseur Edition” of the band’s latest album “In Cauda Venenum.“

Khemmis have been added to Opeth and Mastodon’s spring North American tour. Here’s the dates for that run: 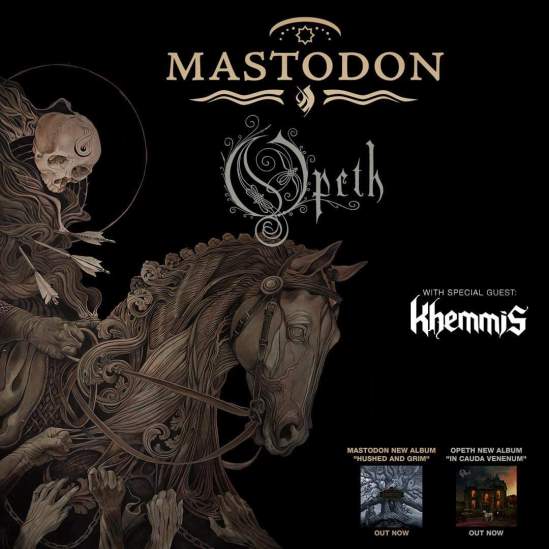 Opeth and Mastodon will be teaming up once again for a spring North American tour. Here’s the dates: