God Forbid will be releasing a limited edition splatter vinyl pressing of “Gone Forever” on June 10. Fans can pre-order the record HERE. 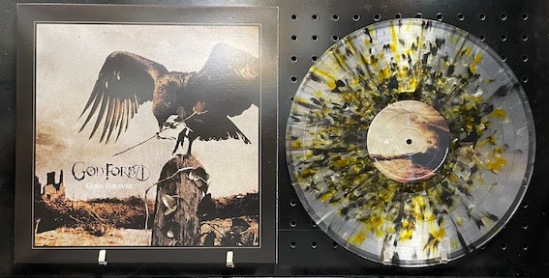 Vocalist Byron Davis said the following about the reissue:

“I think it’s amazing that an album that changed our lives created so long ago gets a fresh new look for today’s world.”

“Although ‘Gone Forever‘ has previously been released on vinyl, the original run was limited and hard-to-find. I am pleased to have God Forbid‘s breakthrough album released properly at a time when vinyl is being embraced by collectors and in conjunction with God Forbid‘s reunion show announcement. This one is for the real GF fans.”

During a recent appearance on Hatebreed frontman Jamey Jasta‘s “The Jasta Show,” Doc Coyle addressed the idea of a God Forbid reunion once again. Notably, the guitarist confirmed that some “things have been in the works.”

“We’ve been in talks, dates [have] been thrown around… So things have been in the works. But with my schedule with Bad Wolves touring and then I’m also doing The Wedding Band with Rob & Kirk with Metallica… I’ve been doing a lot of rehearsing with that and so there was a lot of scheduling conflicts with that.

I think [the reunion] will happen, it’s just a matter of when. Because Byron [Davis, vocalist], he has a family, he’s married, he’s got a house, he’s kind of doing that thing, everyone’s kind of spread out. Same thing with John [Outcalt], our bass player: got a kid, got a house, got a mortgage, wife and you know… everyone’s kind of moved to this different phase of their lives and it makes it really have to create space to do these things and it’s such a commitment of time and effort.

And I’m super respectful of that and I just don’t want to force anything, or make [reuniting] about money, or make it about… too much business. I want it to be about our friendship and kind of doing something for the fans.

It’s kind of funny because it’s definitely come around. I peeked on that Loudwire thing and it’s just a buncha people like ‘God Forbid is so much better than Bad Wolves‘, and it’s like motherfucker where was you on our last tour when there was 112 people at the show.”

He went on to say that their was a European tour offer, but the band are considering the possibility of doing one-off shows and festival dates instead. He also revealed that he has some riff ideas that he could use for God Forbid if they decide to work on new music.

During a recent episode of his “The Ex-Man With Doc Coyle” podcast, Doc Coyle (Bad Wolves) revealed that his old band God Forbid recently received a tour offer. It is still unclear if the band will take the deal, but if they do, ex-Monuments guitarist Olly Steele has already been offered a chance to take part in the reunion as a replacement for Dallas Coyle.

Doc Coyle: “So God Forbid has been getting some offers for tours and reunions and stuff—and I don’t even know if it’ll happen or not—but if it does happen, would Olly Steele be down to play second guitar in God Forbid, if it happened?”

Olly Steele: “Are you shitting me?”

Olly Steele: “I can’t think of anything that would be more fun… If I’m free. I’m not saying I’d never be in a band again, you know.”

Doc Coyle: “If you’re down to do it… The thing about it, it’s not even really being in a band. It’ll probably be some shows and maybe a tour. But there’s nothing crazy, we’d probably take it one step at a time.

And like I said, I don’t even know if the other guys want to do it. I think we’re supposed to have a conference call, kinda talk to everyone and see what the vibe is. But we have a tour offer right now, for a European tour, which I don’t know if we’re gonna do or not.

But it just kinda seems like things have come around and there’s renewed interest in the band. And if I was gonna get someone, you’d be the guy I want to get. So I thought I’d ask you here.”

Olly Steele: “You’re excited? I was 15-16-years-old playing guitar for the first time and learning from you and Dallas, and this has just happened, that’s amazing.”

Olly Steele: “It’s a shame that it may not be the original lineup, BUT, let’s fucking play “Into The Wasteland” seven times in a row.”

While answering fan questions on his “The Ex-Man With Doc Coyle” podcast, Doc Coyle addressed the possibility of a God Forbid reunion. He said the following:

“I think yes. I think [it’s] just a matter of how and when. The logistics… It’s just not easy because guys are all over the place, guys have children, they have jobs, they have wives, they have obligations and it’s not the easiest thing to put together. It’s interesting, we were getting a lot of this additional interest during the pandemic… My main priority is Bad Wolves and so I have to organize everything around that. I would say it’s just baby steps so we’ll see, try and make it work. I would say it is a matter of when, not if, but then again I don’t want to hype people up because it’s just gotta be correct. Everything’s gotta work out.” 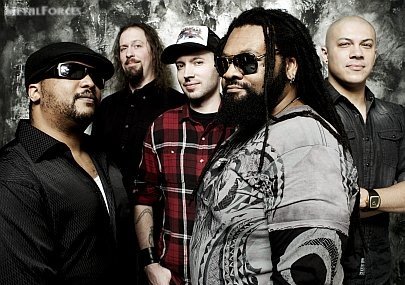 During a recent appearance on the BREWtally Speaking Podcast, Bad Wolves guitarist Doc Coyle was asked about the possibility of a God Forbid reunion. He responded by saying “no one’s really knocking down [the band’s] door.”

“I don’t know about that. Like I said, friends with everybody, it’s just I’m so busy. No one’s really knocking down our door.”

He also added the following after it was mentioned that E.Town Concrete have been playing for big crowds during select reunion shows:

“Here’s the thing, E.Town was probably about 3-4x bigger that we were in our home area. I’m sure we could do like 1 reunion show and maybe sell it out, but I don’t know. I’ve [got] low confidence in how many give a shit to be honest.”

“…It’s hard to gauge if people really care that much, if that makes sense? I’m not saying those people don’t, but it just might be those people. I don’t know if you see comments online if that means there’s hundreds or thousands of people that also feel that way who just aren’t there. It may be true, I’m just… ah, I don’t even know if that’s even a good enough reason to do anything. It would really have to come from a place of ‘hey man, this would sound fun’ or ‘this would be cool’.

Truth be told, no matter what, it’d be a lot of work just getting things together, rehearsing, booking, gear, everything. It’s a lot, but you never know. We’ll have to see that the future holds, but I love all those guys. I love the music and I’m proud of our legacy and I’m happy people still kinda care, cause I do think we did something really cool.”