The Faceless have added more dates to their “Planetary Duality” 10th anniversary tour with Rings Of Saturn, The Last Ten Seconds Of Life, Vale Of Pnath, and Interloper. You can check out the updated schedule below. 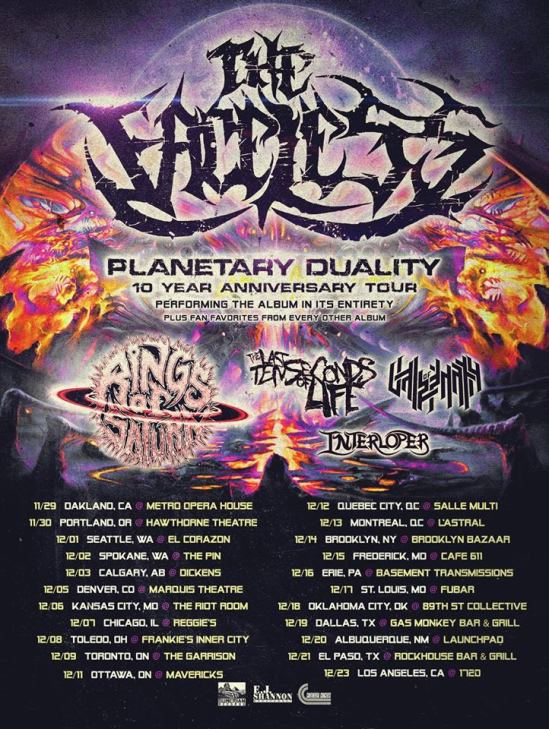 The Faceless have added more dates to their “Planetary Duality” 10th anniversary tour with Rings Of Saturn, The Last Ten Seconds Of Life, Vale Of Pnath, and Interloper. You can check out the updated schedule below.

The Faceless have announced the initial dates for their “Planetary Duality” 10th anniversary tour. Rings Of Saturn, The Last Ten Seconds Of Life, Vale Of Pnath, and Interloper will serve as support. 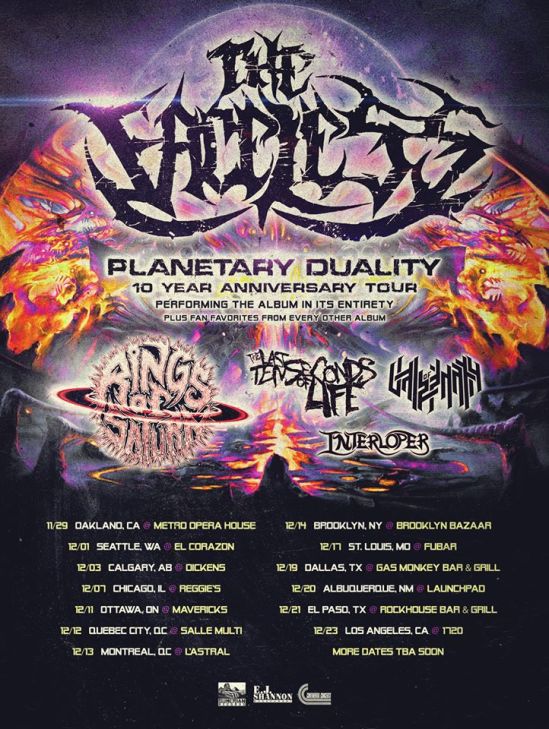 The Faceless’ Michael Keene was recently interviewed by Metal Wani and and revealed that the band’s new album “In Becoming A Ghost“ is nearly complete, and that it will most likely arrive in August release date. You can listen to him discuss that, the 10th anniversary edition of “Planetary Duality,“ and more in the below video:

Keene said the following [transcribed by THE PRP]:

“The current status is this: all tracking is done. Mixing is done. Basically I’m in the mastering stage. I kind of mix and master at the same time, so it’s kind of final touches of the mix and just getting the mastering tweaked just right on the record. Which is literally like, we’re talking a couple days here. The master will be turned into Sumerian in just a few days. And I was very explicit with them that I did not want them to set a release date until I turned the masters in.

Because on previous records there were release dates set and then things ended up taking longer and of course what’s the last that happens, the last thing is the mix. So the mix is the thing that suffered. On “Planetary Duality” for instance I essentially didn’t mix the record because there was no time.

They told me that if I didn’t get the record to them in 24 hours that we were going to miss street date. And I stayed up all night, worked for 24 hours. I had listener fatigue, so I couldn’t even hear the mistakes I was making. And I turned it in as was and then come to find out it sat on their desk for 10 days before they even turned it into the press plant.

So I had 10 days I could have worked on the mix and could have gotten it great, but instead that happened and now I have to live with it forever—well I don’t have to live with it forever because I’m actually doing a re-mix of “Planetary Duality“—re-mix/remaster of “Planetary Duality“—which will be hopefully released next year as a ten year anniversary. But anyway, all that to say, that in the next few days the record will be turned in and street date will follow shortly after.”

He also added the following about “In Becoming A Ghost”:

“It’s the most diverse record that I’ve made for sure. I mean, to give you an idea there’s a flute solo in a song. You don’t have any of that in death metal too often. As a matter of fact, the same guy that played sax on the last record played the flute solo on this record.

Actually one of the things that took… held the record up a little bit was that I was actually kind of having a hard time finding uniformity in the mix, because the material was so diverse. It was really hard to find a universal mix to start from. Because generally with metal—with other styles of music if the mix is different from one song to another, that’s totally fine—with metal everyone expects there to be a certain amount of uniformity. They expect the drum sounds, the guitar tones to be the same, etc., etc.. With how different the material was from song to song, it was hard to find sort of like a base mix—a universal base mix—to start from.”

“It still very much sounds like Faceless album, it’s just even more diverse. And I even went into the writing process with a concept in mind of writing something that had the signature sort of technical death metal sound that was created on “Planetary Duality” combined with the sound of “Autotheism“. Somewhere in-between there, but its own thing as well. So, trying to kind of lay it somewhere between there and then also have it be its own thing and push the boundaries even further of what’s acceptable and still being able to call it metal.”