The 69 Eyes will be celebrating their 30th anniversary by streaming a live show from Helsinki, Finland on June 26 at 10am PDT / 1pm EDT. Tickets for the virtual event are available HERE. Jyrki 69 commented:

“We’re excited to play our 30th anniversary show at Helsinki’s House Of Culture (Kulttuuritalo). It’s a legendary venue where I saw The Ramones back in the day. All the classic rock bands have played there over the years from Jimi Hendrix to Led Zeppelin to Metallica! Now we can invite all our fans all over the world to celebrate with us there.” 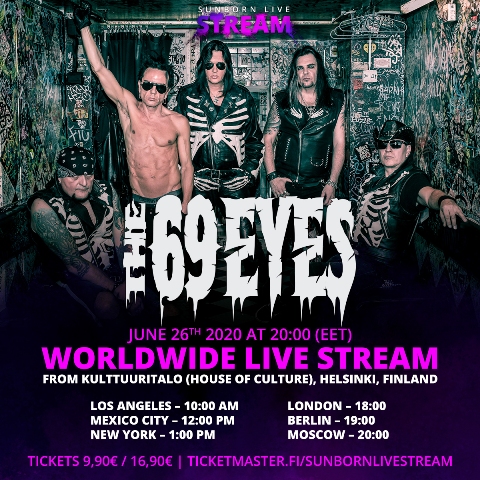 The 69 Eyes have premiered a lyric video for their song “Hell Has No Mercy.” This track is from the band’s latest album “West End.” Jyrki 69 commented:

“I couldn’t think of any hotter options to have in our videos than Dani Divine! It’s so great to return to the American road again, we are very lucky vampires.”

The 69 Eyes have premiered a lyric video for their song “The Last House On The Left.” This track features Wednesday 13, Calico Cooper, and Dani Filth (Cradle Of Filth) and it appears on the band’s latest album “West End.” Jyrki 69 commented:

“HAPPY HALLOWEEN FROM THE 69 EYES! Here’s our treat for you: the ultimate new horror-punk anthem ‘The Last House On The Left’ with the ultimate monster mash team-up: Wednesday 13, Calico Cooper & Dani Filth with The 69 Eyes! Wes Craven forever & Halloween 24-7-365, punks!”

The 69 Eyes have announced a headlining U.S. tour. Wednesday 13, The Nocturnal Affair, and The Crowned will serve as support.

The 69 Eyes have premiered a new video for their song “Two Horns Up.” This track features Cradle Of Filth’s Dani Filth and it appears on the band’s latest album “West End.”

“We’ve been friends with Dani Filth for 25 years and The 69 Eyes did our best-ever and legendary North American tour with them over ten years ago. We were partying with him on my 50th birthday at Hollywood’s Rainbow Bar & Grill last October and came into conclusion that he should sing some guest vocals on our new album. It is mind-blowing to have the world’s most recognizable extreme metal vocalist on the opening track on our album. ‘Two Horns Up‘ speaks about today and to everybody!”

The 69 Eyes have premiered a lyric video for their new song “Black Orchid.” This track is from the band’s new album “West End,” which will be released on September 13.

“This is the most straight-forward gothic rock song on the album. The guy talking in the lyrics is a similar kind of old-fashioned adventurer like the guy in white in Sister Of Mercy’s ‘Dominion’ music video. He likes independent women, nightlife and reads E.A. Poe and Hermann Hesse.

The lyric video is done like all the music videos on this album, with Los Angeles-based director Vicente Cordero. It was filmed during The 69 Eyes’ show at The Regent Theater in L.A. last May. Wednesday 13, Devildriver’s Dez Fafara and Faster Pussycat’s Taime Downe can be seen backstage, among the other usual suspects.”

The 69 Eyes have premiered a new video for their new song “Cheyenna.” This track is from the band’s new album “West End,” which will be released on September 13.

“When I heard the demo of the song, I had the chorus for ‘Cheyenna’ immediately in my mind. It was like a wind whispering or a canyon echoing her name from the past. Who was she? A Native American princess? As I Googled the name, it turned out that a lot of American girls under that name have gone missing. A female ghost rider story was born! Cheyenna is freedom’s child — forever.”

The 69 Eyes have shared an official video for “27 & Done” off their new album “West End.” Notably, the clip features excerpts from the new horror film “The 27 Club,” which will be released on June 13. “West End” will be released on September 13 and it will feature a number of guests including: Cradle Of Filth’s Dani Filth, Wednesday 13, and Beastö Blancö’s Calico Cooper.

Jyrki 69 said the following about the song:

“The track deals with the idea of Hollywood and everyone coming there to make their dreams come true, but it’s very seldom that they succeed and this is something you can see there everywhere. It’s a place that makes you desperate and I wanted to get these dark vibes into the song. But on the other hand the track is also a celebration of life — we should be excited to be here and everybody’s a legend and they should realize that we should enjoy what we do instead of worry what other people think.”

He also added the following about the album:

“The title ‘West End’ evokes a dark image — when something dies, something new comes up and we all have to change in order to stay alive. I feel like this planet is on some turning point. The end of the western world is near and the question is: What is happening when the west ends? The title has multiple meanings for us… but be assured it has definitely nothing to do with The Pet Shop Boys or London.”

In other news, the group have also announced a 30th anniversary European tour:

The 69 Eyes have announced their first U.S. tour in 10 years. MXMS and The Nocturnal Affair will serve as support.

The 69 Eyes have started the recording process for their new album. Singer Jyrki 69 confirmed the news in the below tweet:

Just in case you are wondering what’s going, here’s a status update: The 69 Eyes have started recording our 12th album with producer Johnny Lee Michaels. Last week @jussi69official recorded his legendary vampire beats down and now we are recording the rest. More updates soon! J69 pic.twitter.com/VtVeNACiTS