Former members of Alterbeast have taken to social media to call out the band’s guitarist Andrew Lamb. They have accused Lamb of not paying his bandmates, trying to “blame others for his own bad decisions,” and more.

“After recent events, I want to announce that I am no longer in ALTERBEAST nor do I want to be associated with it. The band is run entirely by Andrew Lamb and everyone that’s been in and out the past few years has essentially been a live or fill-in member with virtually no say in anything.

Originally I was going to be doing the EU tour as a last ‘hoo-rah’ but after being personally attacked and blamed for him getting a felony in Texas (🙄) I’m done dealing with a baby-man who finds any way he can to blame others for his own bad decisions. Good luck burning every last bridge around you, dude.”

“As some of you may know, I was in the band ALTERBEAST for a couple of years. It’s been a year and a half since I quit and since my departure I had kept in good standings with my previous bandmates. I did all I could behind the scenes years before I joined the project as well as did my best to continue helping the project anyway I could after I quit.

I can say that in light of recent events, I would like to share with you the reasoning of my departure. As many probably already know, it was because of our Guitarist Andrew Lamb. There’s a million and one details I can go into about how I spent thousands of dollars to help make shit happen, how I ended up homeless twice cause of not being paid on tours, how many sacrifices I made to help get the project out of the gutter and on the road touring, and not receiving a single penny for our album ‘FEAST‘ (which sold fairly well), but I’ll sum it up real quick for ya. Andrew sucks to work with and everybody whos been a part of Alterbeast could say the same.

I spent countless hours being there for someone I saw some good in while others all around me warned me of his antics. I gave him a million and one chances, my dedication as a friend and business partner, my 1000% devotion to making the band the best it could be with all of my resources, and he took it all for granted.

He took advantage of my kindness and caring nature and spat in my face while doing it. Dealing with backhanded insults and childish behavior on the daily from a guy who had way less experience in the industry than myself was appauling to say the least.

At the time we had a successful release and tours lined up and so much opportunity for the band, so I tried to keep a happy face on and push through the hard times for the sake of the project. By the last tour in Canada I had seen a much more fucked up side of Andrew, it then became apparent to me that I no longer needed to be a part of the project. The way he treated my bandmates and others was unacceptable. All of us stayed quiet and put up with it for the sake of the band and our music careers.

Since my departure we had remained friends and I wanted the project to succeed so I recommend several friends as replacements as well as tried to support the project. I may have been a bit bitter about how things went but I still felt there was some good and so I let the past go.

In Todays events I witnessed another fill in member dealing with more bullshit from Andrew. I’m over it. That Gofundme was a scam and he got over on so many of his fans by having them donate then selling them said merch they had already paid for for him. He used my friends faces as poster childs to get donations. He throws blame at every one but himself. I’m over it and I’m tired of seeing this dude fuck over people.

I no longer want my name associated with ALTERBEAST and the work I had with the band. I wouldn’t recommend anybody to ever work with Andrew Lamb. I suggest y’all stop ordering merch and hopefully STOP supporting ALTERBEAST overall. Andrew is the only one in the band and reaps all the benefits of your donations and merch sales.

ALTERBEAST was a band i was dying to be a part of since it’s previous name. I spent so much time behind the scenes before I joined and after and I’m thankful that the project and the blood, sweat and tears that were poured into it changed my life and my career and i’m thankful for the experiences. But it only takes one asshole to ruin it for every one else.

I’m tired of seeing this asshole fuck over my friends. Fuck Andrew Lamb!

Lamb has yet to respond to any of the claims.

Alterbeast have launched a crowdfunding campaign to try and get back on their feet following a number of issues they faced on their recent tour. While the band were out on the road, they didn’t get the guarantee they were promised, they got arrested for weed possession, and they ultimately had to cancel the trek due to an illness in the family.

“We are Alterbeast, a death metal band from Sacramento, California. We recently embarked on a 2 week tour that didn’t go how we had planned. After having our guarantee agreed upon, we ordered merch and took on payments for a used van, About a week before the start of tour we found out that we would not be receiving our guarantee, but instead splitting around $200 a night with 4 bands.

On top of that all of us were either given citations or felonies for a laughable amount of weed in Texas, resulting in over $1000 in bail to get our guys out of jail. And to make matters worse, our drummers mother in law fell into critical condition, abruptly ending the tour for us, and sending us home with our tails between our legs.

Now we face a lot of uncertainty as well as a massive merch bill that will begin to incur penalty fees as well as ruining our long standing relationship with our merch company. We have never crowdfunded anything in the past but now we have no other recourse than to ask everyone for any help they can give. We will be putting up the remainder of our merch this week on our BigCartel page and if you can donate, buy any merch or share our GFM link, or BigCartel link, we would be extremely grateful.

We know times are tough for everyone but we could greatly use your guys support in what has turned into an emotional, physical, and fiscal tragedy for everyone in the Alterbeast camp. Thank you guys so much and we hope to have new music as well as new tours for you in the near future. Thank you.
–Alterbeast“

“I can hardly muster the strength to make this post but here we go. We unfortunately have to cancel our upcoming shows in NM, AZ, and CA as our drummer was unable to make it back to tour after the family emergency we mentioned in previous posts. Our hearts are with him and his family at this time. Once finding out we just made the 1700+ mile trek home, getting back late last night.

Extremely sorry we are just now letting you guys know. Between the long driving shifts and long gaps with no internet, mental and physical exhaustion, and knowing the thought and care we would need to put into this post, we thought it best to make it today after getting some rest. Besides the family emergencies, and arrests, a great many things didn’t go our way on this tour and we are left with a bit of a fiscal dilemma.

The most important of which being our merch debt. We are very concerned with this first and foremost as we want to maintain our good relationship with a company that has always done right by us. We will be putting up all the merch from tour this week on our BigCartel page, so if you can, please pick something up. We also will have a gofundme up. Anything helps at this time. Thank you guys so much for your support, messages, and everything else you have done so far. Any time we feel like quitting, you guys pick us up. Thank you and we love you.”

Alterbeast, Cognitive, Micawber, and Warforged have announced an October tour together. You can find the dates for that run below.

Alterbeast have announced some West Coast shows with Aethere and Continuum. Here’s the dates: 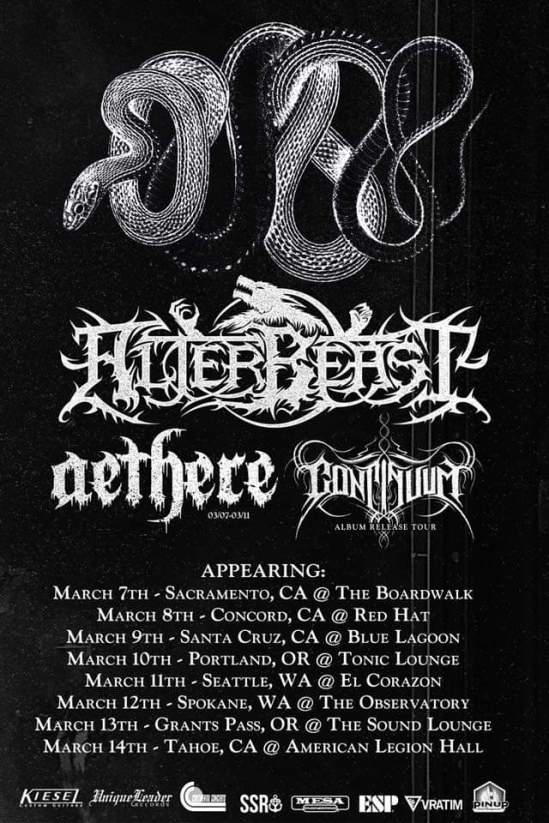 Alterbeast are streaming their new album “Feast” in full, via Decibel. The effort will officially be released on February 23.

Alterbeast have premiered a new song titled “The Maggots Ascension,” via Metal Injection. This song is from the band’s new album “Feast,“ which will be released on February 23.

“We are stoked to give you another advance track from Feast! ‘The Maggots Ascension‘ is a part 2 to the song ‘Throne of Maggots‘ from our first record Immortal. Lyrics cover the maggots metamorphosis into flies and from slave to reign. Music is in the same vein as ToM: Fucking. Brutal. We hope you dig it and can’t wait for you to hear all the other stuff we did on ‘FEAST‘ that we know you will throughly enjoy! Keep on the lookout for more tunes and see you on the road this February/March w/ Grindmother, Inferi, The Kennedy Veil and Aethere!”

Alterbeast have announced a 2018 tour with Grindmother and Aethere. The Kennedy Veil and Inferi will also perform on select dates.

Alterbeast have premiered a lyric video for their new song “Apex Night Eclipse,” via Metal Sucks. This song is from the band’s new album “Feast,“ which will be released on February 23.

“We are excited to give you our first single off our new album ‘Feast‘! We wanted to recreate that magic of growing up and having to hide certain records under your bed. And with songs like ‘Apex Night Eclipse‘, we think we achieved that goal. Hard hitting, relentless riffing, and vocals that will leave every church in flames.

Alterbeast denies Christ with every note of ‘Apex Night Eclipse‘. Toss your Ouija Boards in the garbage, because this blasphemous hymn is guaranteed to summon the Devil! Get your first glimpse of Michael Alvarez’s brute vocals as well as Alex Bent’s crushing drums! End piano piece written and performed by our good friend Ryan McNatt of the very talented Enigma! We hope you dig it!”

Alterbeast have revealed the details for their new album “Feast.” The effort will be released on February 23, and the cover art/track listing can be seen below:

“I’ve never been more proud of a record then I am with Feast. We poured our hearts, souls, hate, and malice into this album, and I think it really shows. With the addition of Michael’s ‘take no prisoners’ vocals, and Alex Bent‘s [Trivium] ‘Beast-Mode’ style drumming; Feast is hands down our best album yet, and it will remind everyone that Wolftang Clan ain’t nothin’ to fuck with.”

“When listening to the rough pre production I was immediately blown away at the how awesome the songs were! Both Andrew and Alex really killed it, inspiring me to deliver some of the best vocal tracks I have ever recorded!” I’m truly honored to have taken part on this record and I hope everyone enjoys it as much as we enjoyed writing and recording it!”