KnuckleBonz have announced that they will be releasing new Rock Iconz statues of Scorpions’ Rudolf Schenker, Klaus Meine, and Matthias Jabs later this year. On top of that, the company will also be releasing a 3D vinyl statue featuring the cover art for “Blackout” and a “Road Case On Tour Series Collectible.” Pre-orders can be found HERE.

Knucklebonz is proud to present @scorpions 3D Vinyl is now available for Pre Order 🙌 ⁣ 👉LINK IN BIO👈 ⁣ Pre Orders Save 20%!! – Scorpions (Blackout) 3D Vinyl™ is now available for pre-order. Only 1982 pieces of the 3D Vinyl will be created. All Rock Iconz statues are officially licensed, limited edition collectibles.This is a fine-arts process where each statue is hand-cast, painted and numbered. #Knucklebonz #Scorpions #schenker #limitededition #vinyl #vinyljunkie

The @scorpions Road Case On Tour Series Collectible is now available for pre-order. LINK IN BIO Pre Orders Save 20% 🙌 This ‘On Tour’ Series collectible is a officially licensed, limited edition collectible; only 3000 are cast. Each are hand detailed and comes with a certificate of authenticity on the base. The Rock Iconz ‘On Tour’ Series brings music fans and collectors moments in and around the world’s great live performances and world tours. Pre-orders available now. Estimated ship date: Fall 2020. Follow us on FaceBook for updates. #scorpions #rockyoulikeahurricane #schenker

During a recent interview with the Scorpions’ French fan club, Klaus Meine offered an update on the band’s new album. The effort is expected to be released in 2021. 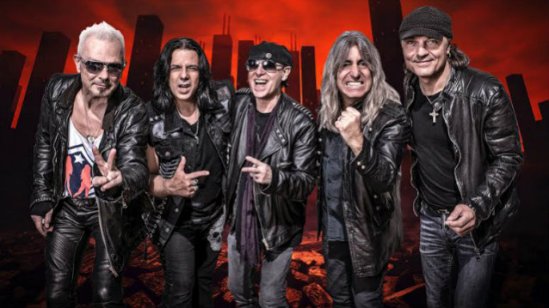 Meine said the following when asked how the coronavirus pandemic has impacted the group’s new album plans:

“We were supposed to start working in the studio [two weeks ago] and all of us are working in their own studios, but we’re in touch. And we keep going and we try to make the best out of this isolated situation… The last week of March, we were supposed to start working here [in Germany] before we wanted to go out together with the whole band here in the studio in Hannover. Our producer from America wanted to come over here — Greg Fidelman — and then we had to change the whole plan. And it turned out we ended up with everybody doing his own thing, working on songs and working on stuff at his own studio. So, for me, it was good. With the support of [our recording engineer] Hans-Martin Buff, he [took] me through all the different stages to record myself — not only to be a writer and a singer but also become an engineer, recording myself. And it was a nice challenge —and it still is. Every other day, I come up with things and go, ‘Hey, c’mon, Hans-Martin, you’ve gotta show me…’ It’s easy to communicate this way and get things done. That’s, so far, the good part of this in this very difficult time. So I think we’re very privileged that we can be at home and that we can spend time in the studio and do what we do anyway. But I’m sure, and I know there will be a point where it’s about time for the whole band to join together and put things on the next level.”

He went on to say that the band “have a lot of songs” written for the record:

“We started writing for this album early last year until June 2019. And then we had to go back on the road. At that point, we had a couple of great songs already, so the whole thing was in progress. It felt really good at that point. Now, coming back from Australia and Southeast Asia, it was about time to pick up the recording sessions and go back into it. I know when Rudolf [Schenker, guitar] came back, he went to Thailand — the last show was in Singapore in early March and he went back to his place in Thailand — so he picked up the songs and a couple of weeks later, there was a lot of stuff coming back from the riff master. [Laughs] It’s a good creative mood, and it’s really exciting.

Every other day, I ask myself, ‘Klaus, are we really doing a new album?’ ‘Is anybody waiting for a new album from the SCORPIONS out there? But at the same time, it’s wonderful, after all these years, we’re still excited to create new stuff and to create new songs and we’re all into it. And having Mikkey [Dee, drums] in the band now, it’s, like, ‘Wow.’ This could be an album where it’s a little bit more on the harder edge.”

“[Greg] used to work with METALLICA and SLIPKNOT, so we feel we have the right producer to go into a production where it’s all about attitude and playing together. Which, unfortunately, right now is not happening — Greg can’t come over here, we can’t go over there to the United States — so right now it’s all a little crazy. And we don’t know how long it will take, really, to keep going and take this to the next level. But right now, it feels good. There’s a lot of work to do, and I’m happy that I can work on new material, and every other day I have songs — I put my vocals on. And the fact I do it myself — this is what I’m most proud of.”

Meine also had the following to say about being at home for long period of time:

“This is the time [when] solidarity and creativity are important, and to stay in touch with each other.

When we came back from Australia and Southeast Asia, we came here [to Germany], and a few days later, the situation with the coronavirus became more serious every other day. And so we thought it’s important to stay in touch with our fanbase around the world and also encourage them to stay at home in these very, very special times. It’s so important that we all try to not to be too close to each other.

I haven’t been at home for such a long time in one run, so it’s kind of unusual for all of us, I guess. But coming from this long trip, from Down Under, we spent so much time [on the road] in the last couple of years, so it’s, in a way, nice to have a break. And right now, it’s beautiful weather and [I get to] see a blue sky. I can’t complain, because it’s beautiful to be at home with your loved ones and spend some extra time together, and at the same time have a chance to be in my studio and work on new songs, write lyrics.”

Scorpions singer Klaus Meine has revealed that he recently underwent surgery to remove kidney stones. This news comes after Live Nation previously announced that the band’s February 22 show with Whitesnake in Sydney, Australia had been postponed. Their February 24 show in Brisbane, Australia has since been cancelled as well.

Dear Fans , the good news first …. we had a fantastic show in Melbourne wednesday night at the Rod Laver Arena …. loved every minute of it …. it just feels soooo good to be back in Australia !!!! The bad news is… I have had kidney stone surgery in a Melbourne Hospital … it was a very painful attack ,…. In the hospital they removed the stone, and put in a stent …. can you imagine how i feel right now ??? So sorry Sydney …. Do we have to cancel again ??? It looks like it…. but we are hoping to re-schedule for next week,day to be announced. Dr Katz and his team are taking very good care of me … i’m in the best hands, but i doubt i’ll be back on my feet until early next week….. with lots of Love with a Heavy Heart from Melbourne …. Klaus

During a recent interview on the “Talking Pictures” TV show, Scorpions’ Klaus Meine offered an update on the band’s new album. He said the following:

“We go to Australia in February, and Southeast Asia, and when we come back, we go into the studio here in Germany, [in our] hometown of Hannover, for pre-production. And then in May, it looks like we come to Los Angeles and start working in the studio, start recording, until the residency in Vegas. And hopefully we’re done by then. If not, we keep going and finish the album, which hopefully will come out at the end of the year.”