Saliva have announced a June headlining tour. Otherwise and The 9th Planet Out will serve as support.

“‘Revelation Man’ is about a guy who couldn’t accept the struggles of his own addictions. He had to hit rock bottom to see the light. When I say ‘had to die to find a revelation,’ I don’t mean dying literally but there were moments in my life where I felt like I had. It particularly relates with me because of my sobriety of three and a half years. I went through a lot of things before I got sober.”

Josey Scott has taken to social media to comment on his failed reunion with Saliva. The singer tweeted the following:

I want 2 apologize 2 my fans because I thought I was gonna reunite w/certain people & make u new music, & that fell through, but, I believe everything happens for a reason. There are no coincidences. A blessing in disguise. Now it’s just u, & me, how intimate is that? #SV2022 pic.twitter.com/gLJzcL6V8h

Saliva have released a new career-spanning documentary titled “Every Six Seconds: Twenty Years Later.” You can check that out below. This news comes as the band are preparing to release their new EP “Every Twenty Years.” That effort will be available on May 7 and it will feature re-recorded versions of songs from the band’s 2001 album “Every Six Seconds.” Guitarist Wayne Swinny commented:

“We felt like it would be cool to give the fans a little peek behind the curtain of the history of Saliva, so to speak.”

“Twenty years is a long time ago, but I still remember it like it was yesterday. Making this documentary brought back memories of some really magical times.”

“My decade in the band has been a great chapter in my life. This documentary was something we wanted to do for the fans to have an inside look because without them, Saliva doesn’t exist. The ‘Every Six Seconds’ record has carried this band for 20 years and more. That’s special!”

Saliva have shared a new video for the 2021 version of their song “After Me” The updated take on the track is from the band’s new EP “Every Twenty Years.” That effort will be released on May 7 and it will feature re-recorded versions of songs from the band’s 2001 album “Every Six Seconds.”

Saliva have released a new version of their song “Click Click Boom.” The updated take on the track is from the band’s new EP “Every Twenty Years.” That effort will be released on May 7 and it will feature re-recorded versions of songs from the band’s 2001 album “Every Six Seconds.”

“I think the combination of multiple genres of music has contributed greatly to the popularity of ‘Click Click Boom‘. Producer Bob Marlette took a song which was a cool, interesting rock song and crafted it masterfully into a piece of music that has stood the test of time for two decades and will continue to do so into the future.”

Saliva have announced that they will be celebrating the 20th anniversary of “Every Six Seconds” during their “What Happens in Vegas, Streams in Vegas” livestream concert. The event will be held on April 9 and tickets can be found HERE. This news comes after the band previously announced that they will be releasing a new EP featuring re-recorded versions of songs from “Every Six Seconds” on May 7. That effort is titled “Every Twenty Years” and more details on it can be found HERE.

It looks like Saliva are no longer planning to reunite with original singer Josey Scott. Guitarist Wayne Swinny recently addressed the idea during an interview with Meltdown of Detroit’s WRIF and said that “it ain’t gonna happen.”

“We were part of the conversation. After Josey made his announcement, there was a few text messages going on. I did talk to Chris [D’Abaldo] one time. But the problem is, we kind of already have a SALIVA. The problem with doing the reunion show is what do I do? Pull the bus over and say, ‘All right, Bobby [Amaru], Brad [Stewart], hop out, man, to the hotel room for a couple of [months].’ It just didn’t make sense on the business end. There was preliminary discussions, but it never really got off the ground. We just basically had to make plans and keep this train rolling, so to speak. It didn’t make sense to me to stop what we were doing. ‘Cause this unit, we’ve been together, it’s been almost 10 years now, with Bobby in the band. Brad came along shortly after that. We’re tight. We get along. It’s a well-oiled machine. We’ve got a great crew, a great bus driver. It would throw a monkey wrench into the actual SALIVA.”

“Bobby pushed me and said, ‘You know what, dude? If you wanna do it, do it. At least talk to [Josey] about it and check it out.’ I did. But there was no business plan put together. It was one of those — it seemed like a spur-of-the-monent idea, but it didn’t happen. It ain’t gonna happen.”

“If you wanna do something, do it. But you can’t just talk about it and have it magically happen. There’s work, there’s planning, there’s stuff that goes into it, and none of that stuff was done early enough to pull it off.

“Yeah, there was some fan response, saying, ‘Wow, yeah, that might be cool.’ But it didn’t get enough steam to take off. All the preliminary stuff kind of got set up, and it just didn’t jell.”

“It just didn’t make sense to stop what we [the current lineup of SALIVA] were doing and do that, because you’ve got momentum, we’ve got a groove going, the band’s tight live. I didn’t feel like we should give that up or give that a rest.”

Saliva will be celebrating the 20th anniversary of “Every Six Seconds” by releasing a new EP titled “Every Twenty Years.” The effort will be released on May 7 and it will feature classic songs re-recorded with current vocalist Bobby Amaru. You can stream “Your Disease” from the EP below: 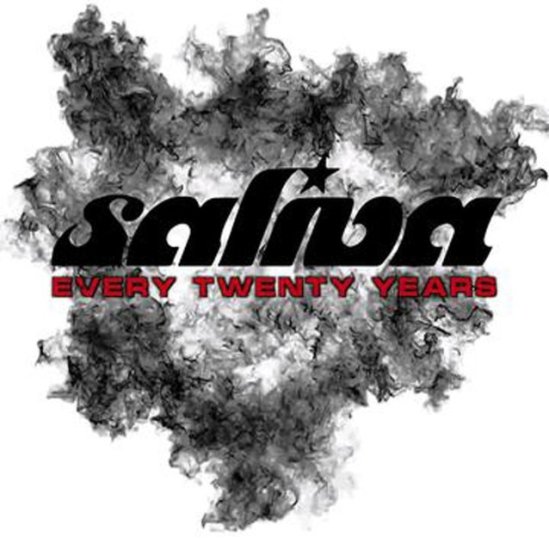 “In the 10 years I’ve been with the band, I’ve realized how strong our fan base really is. I wanted to do something for the fans for embracing me with open arms. Fans have asked me all the time if we ever thought about recording some of the old hits with my voice. I’ve sang those songs enough that they have become an important chapter of my life. What better way than to revive this album with an EP to mark the 20th anniversary? People of my generation and all around rocked these tunes before and will continue to. ‘Every Six Seconds’ brought Saliva abundant success and we are all grateful.”