I Killed The Prom Queen’s “classic lineup”, featuring Jona Weinhofen, Kevin Cameron, Michael Crafter, JJ Peters, and Sean Kennedy, were supposed to play a one-off show at next year’s UNIFY Gathering, but the band have since been dropped from the festival. Organizers decided to cancel the performance after receiving backlash due to past sexist comments made by Crafter.

“Today UNIFY Gathering has made the decision, with the backing of band members, to remove I Killed The Prom Queen from the lineup for Unify Gathering 2019.

We made this decision because historical comments made on social media by former member Michael Crafter, who was to re-appear as guest singer of I Killed the Prom Queen for their one- off 2004 nostalgia set. These comments fall well short of today’s community standards and were considered deeply offensive to many people within our music community.

These comments are completely unacceptable and contrary to our deeply held values and beliefs that music is for everyone and to be enjoyed by all.

We want to create a culture of positive change within the music industry and it’s our responsibility to call out unacceptable behaviour wherever we see it.

UNIFY is committed to ensuring a safe place for anyone and everyone who wants to enjoy music. This is why we jointly launched the ‘Your Choice’ initiative, aimed at addressing cultural issues and harmful behaviour within the music festival landscape.

On reflection, we acknowledge that Michael Crafter shouldn’t have been chosen to appear at Unify Gathering 2019. We’d like to acknowledge that the members of the band have been really open and helpful in this conversation, and we wish them the best moving forward.”

Crafter has since apologized:

“Two years ago and plenty of time years previously, I said a lot of dumb stuff online to troll, cause drama and bait people to piss them off. Things I said then are not a reflection of who I am today, as two years is a long time. I completely understand why people are pissed off, and I am sorry and I really regret it. I want women to succeed in music, my daughter included if that’s the path she chooses. I’m massive on being positive and pushing yourself and think my life nowadays is a reflection on that…”

If you’re curious about what he said, the following comment has been circulating online:

I Killed The Prom Queen have announced a summer European tour. The band will also be joined by special guests The Browning, Feed Her To The Sharks, Empires Fade, and To Kill Achilles. 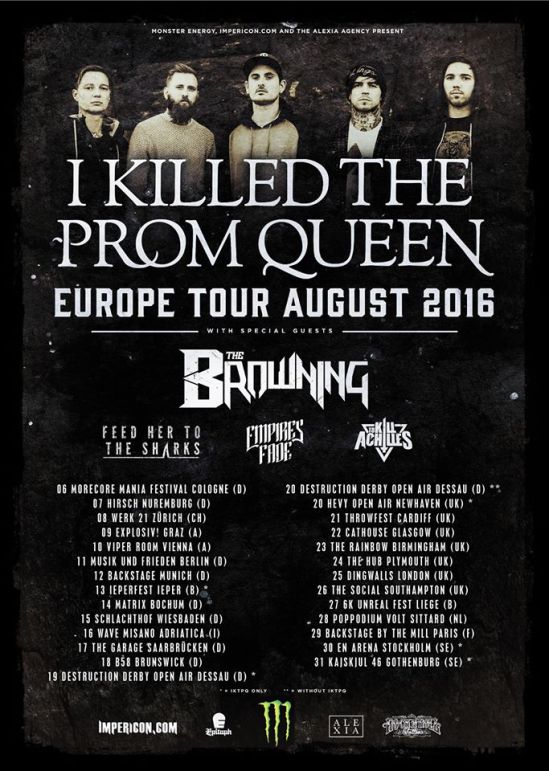 I Killed The Prom Queen have announced an Australian tour to commemorate the 10th anniversary of their album “Music For The Recently Deceased“. You can see the dates below

I Killed The Prom Queen have issued a statement about their recent detainment in Malaysia. You can read that below. 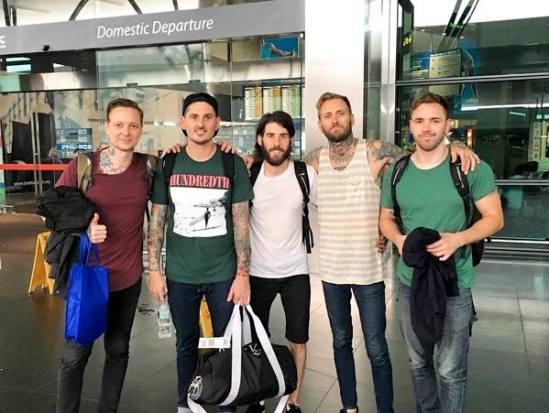 “No doubt most of you have been made aware in some form of IKTPQs drama over the past weekend. Various media have made ill-informed statements of the events so we wanted to both clarify from our side, and also apologise to the many Indonesian fans let down by our forced disappearance from the amazing Rock In Solo festival. As a culmination to an otherwise fantastic SEA tour, we’re just as disappointed as you all for failure to perform this date.

To keep it brief, we were put in jail Sat-Monday due to our promoters negligence in securing us the appropriate permissions to perform in Malaysia after he received an immigration warning but failed to tell us after we explicitly asked multiple times, all the while being aware of our upcoming consequence. And by jail we mean yes, standard, 3rd world condition Malaysian prison, huddled on a wet tile floor of a 5×10 cell with 35 other inmates. It was reported we were posted up in some cushy airport hotel but this couldn’t be further from the truth. Nevertheless this post isn’t a fish for sympathy, just a clarification.

As a band who has spent the majority of the last decade performing legally worldwide, we totally understand how to operate appropriately and were majorly let down on this occasion after quadruple checking that we were “safe” to perform in this territory with no backlash. Shocked and disappointed of being flat out lied to and having our lives put in such a predicament is an understatement, especially since the initial consensus would be incarcerated for 14 days minimal, and in all honesty we were led to assume that after that time we would turn into a forgotten statistic. Scary stuff.

But however abominable we found the conditions and treatment, such nuances pale in comparison to not only the heartbreaking worldwide events of this week and the millions of individuals living in these horror conditions for much much longer. So to spare the hundreds of outrageous details of the whole ordeal, save for those close to us wanting a detailed account, we are just grateful to be back home with our friends and family and eternally grateful to M. Anderson and the Australian Embassy for the quick diligence in securing our release in record time. A big apology/ thank you/ second apology of course has to go to our drum bro Adrian Horsman from In Trenches for filling in on these shows for us and living through the… “events”

thanks for all the support, and again to the SEA fans of the other dates for making it a trip that won’t be forgotten anytime soon! Heres us upon release, happy to be un-handcuffed and flying home!

–Kev on behalf of a very relieved IKTPQ”

I Killed The Prom Queen were been released after being detained in Malaysia for two days, due to visa issues. You can read more about that in the below tweets:

Sorry to all the Indonesian fans four our absence from @Rock_In_Solo. We were being detained in prison in Malaysia for the past 2 days

Shout out to our homies from Pakistan still in the slammer! Big up Usman, Fazil & the crew #JUTT #159

A lot of press is stating we were deported. For the record we were released with no action against us & apologized to by DG of immigration

I Killed The Prom Queen were supposed to play at the KL Venue in Kuala Lumpur yesterday (November 14), but they ended up getting detained in Malaysia, due to visa issues. Jona Weinhofen posted a series of tweets about the situation, which you can see below:

Weirdest part is some of the immigration officers asked us to autograph stuff & one is wearing a prom queen shirt. Still locking us up tho

At least we have food and water and we are in good health. Things could definitely be worse and our situation pales to other recent events