Dropkick Murphys have announced the dates for their 2023 “St. Patrick’s Day Tour.” The Rumjacks and Jesse Ahern will open on most dates.

With The Rumjacks and Jesse Ahern:

Dropkick Murphys have shared an official video for “Two 6’s Upside Down” from their upcoming album “This Machine Still Kills Fascists.” That effort will be released on September 30 and it will feature tracks with lyrics from Woody Guthrie. Ken Casey commented:

Dropkick Murphys will be releasing a new album, titled “This Machine Still Kills Fascists,” on September 30. The effort will feature tracks with lyrics from Woody Guthrie.

“I collected lyrics on all kinds of topics…lyrics that seemed to be needed to be said – or screamed – today. Ken Casey is a master at understanding Woody’s lyrics, which can be complicated, long, deadly serious, or totally ridiculous. DKM is capable of delivering them all.”

“Nora gave us the privilege of going through the archives and selecting some lyrics to use. The common thread that I see through everything was this love for people and this understanding of the universal truth that there is no one person fundamentally better than another person.”

“Woody Guthrie, he’s the original punk. He went against the grain, he fought the good fight, he spoke up and sang about his beliefs. I’m motivated by reading what he wrote and am inspired by his courage. One man and a guitar – it’s powerful stuff.”

With this news, the band have also announced an acoustic tour with Jaimie Wyatt and Jesse Ahern:

Dropkick Murphys’ Al Barr will be missing the band’s upcoming tours as he stays home to care for his ailing mother. During his absence, Ken Casey will be handling his parts with special guests.

We’ve been hard at work rehearsing for the first St. Patrick’s Day Tour in THREE YEARS.

This morning, we have very sad news to tell you. Over the last few months, Al’s Mother, Ingrid, has suffered a series of strokes. She has also been diagnosed with Lewy Body Dementia. Al, his sister and wife have been caring for Ingrid round the clock for months. Please join all of us in holding Ingrid in your prayers.

Dropkick Murphys have always been about FAMILY. And in the spirit of FAMILY FIRST, Al has had to make the very difficult decision to stay home for the rest of the year to care for his Mom, so he will not be with us on the upcoming tour or in Europe this summer. We appreciate your compassion for Al’s family, and we know as part of our family you will understand and support us in dealing with these difficult times.

THE SHOW WILL GO ON with Ken covering most of Al’s parts…along with some special guests like Jesse Ahern, Mikey Rivkees from the Rumjacks and Jen Razavi from Bombpops joining us on vocals as well. Al will be cheering us on from home – and we will see each and every one of you starting next Monday when the tour kicks off in Reading, PA !!

Dropkick Murphys have announced the dates for their 2022 “St. Patrick’s Day” tour. The Bombpops and The Rumjacks will serve as support. Pennywise’s Jim Lindberg will also perform during the trek’s closing date in Boston, MA. 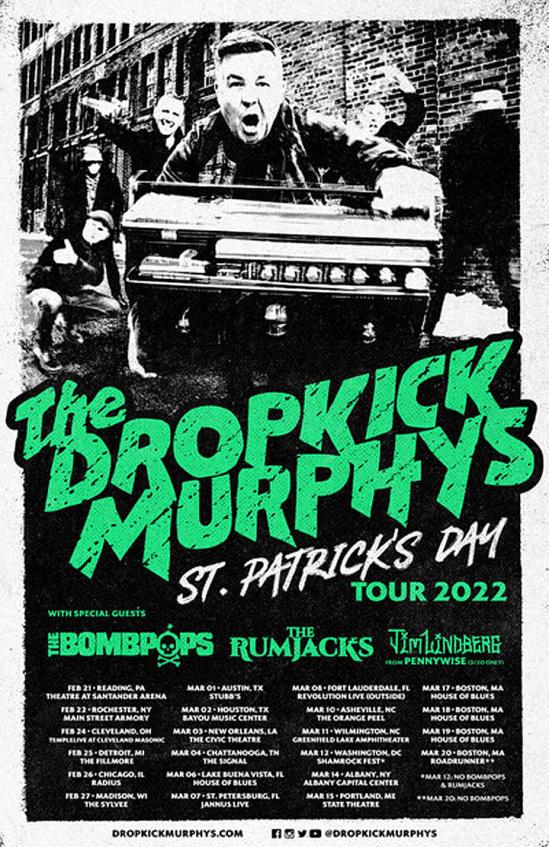 Dropkick Murphys and Rancid have announced a co-headlining U.S. tour. The Bronx will open on most dates.

“Looking forward to hitting the road with the Dropkick Murphys again for the second edition of our ‘Boston To Berkeley’ tour. Our good buddies The Bronx will be joining us on tour as well. See ya in the pit!”

“Can’t wait to get back out there and kick the touring door open again. This is a great lineup and we are gonna take the country by storm.”

Dropkick Murphys have premiered a new video for their latest single “Queen Of Suffolk County.” This track is from the band’s new album “Turn Up That Dial,” which will be released on April 30.

Dropkick Murphys have released a new song titled “Queen Of Suffolk County.” This track is from the band’s new album “Turn Up That Dial,” which will be released on April 30.

Dropkick Murphys have announced that their new album “Turn Up That Dial” will be released on April 30. With this news, the band have also premiered a new song titled “Middle Finger.”

“Turn Up That Dial” Track Listing:

Ken Casey said the following about the new record:

“On this record, the overall theme is the importance of music, and the bands that made us who we are. We just hope [the album] takes people’s minds off their troubles. We’re so fortunate and grateful to be in the position to share a little happiness in our own way. Our gratitude levels are off the chart. 25 years ago, somebody bet me 30 bucks I couldn’t form a band with three weeks’ notice to open for his band. As kids, we’d never been out of New England and here we are – we’ve made ten records and have been all over the globe. If there’s a message to this album, it’s ‘put your fist up and play it loud.’”

“Instead of charging for tickets, we’re going to ‘pass the virtual hat’ so you can donate what you’d like to help support us in our efforts to keep paying our employees. When we did the first two free livestreams for charity, our fans were super generous and we raised lots of money for good causes. But frankly, we’ve been out of work for over a year, so this one, we’ve gotta make about us. Of course, a portion will also go to charity, as always!”