Vampires Everywhere! have premiered a new video for their new single “Tear Me Down.” You can check that out below:

“I am excited to announce the new Vampires Everywhere single ‘Tear Me Down.’ This would be the first time in VE history that I ever tackled lyrics about myself. I tend to focus on my past relationships because it’s cathartic to release those demons on paper. However, this time around I couldn’t help myself. The song is about my struggles in the music industry. It’s about the torment I faced being different and the hardships associated with resurrecting myself three different times. If anything, it’s a positive song because I’m still here talking about it.

I wrote this track with my guitar player Craig Pirtle. We wanted to focus on combining both elements of goth, metalcore, and pop punk. We always make a conscious effort to keep our songs sounding current and fresh. It’s easy to get lost in nostalgia. It’s hard to write something old that you grew up on and attempt to wipe the dust off of it. I feel we definitely achieved what we set out to do. Big thank you to Nick Sampson for the amazing mix/master.

The music video was shot in downtown Los Angeles. I wanted to involve the whole band in the storyline without saturating the video with the underlying plot. The story is about a coven of vampires. The vampire witch (Ariel Peake) is negatively influencing the leaders of the coven. After I discover her treachery, I confront her and she turns to black magic to paralyze both of the coven leaders. Then taking over the coven. The whole plot is a metaphor for losing control.”

Vampires Everywhere! have premiered a new video for their new song “Sudden Death.” You can check that out below:

“I am beyond excited to continue my 12-year journey with Vampires Everywhere into 2022. Bringing back Vampires has inspired me and given me a fresh outlook on my music career. That being said I’m stoked to release our next single ‘Sudden Death.’ I wanted to tackle my love for the occult and my relationship demons. This song is a direct hybrid of those elements. The music video was so fun to shoot this time. Everything was perfectly planned out and storyboarded. It’s about a girl that is trapped in her own head, toying with the idea of taking her own life. She’s been turned into a monster, a vampire by me. She’s watching me from this creepy TV HQ-type space debating her next move. She ultimately decides to destroy me to get revenge to appease her own demons. I’m excited for people to see and hear the new 2022 Vampires Chapter. I am grateful we will be hitting the road in February to play ‘Sudden Death’ live as I’m stoked to see how it translates on a stage.”

Vampires Everywhere! have announced a February headlining tour. Young Medicine, City Of The Weak, and Junexa will open.

Vampires Everywhere! have premiered a new video for their new song “Witch.” The track serves as the band’s first new music since they went on hiatus in 2016 and it will appear on their upcoming EP “The Awakening.”

“I am super proud of “Witch” our first single off our upcoming EP on Cleopatra Records ‘The Awakening’. Me and Craig Pirtle (guitars) set out to write an album based on our love of 808’s, the emerging shift in rock culture, & goth rock. We wanted to stray far away from our last musical endeavor with DGA and write something purely based on our love of music. We didn’t want to focus directly on radio and took a more organic approach to the writing.”

He also added the following about the new EP:

“It’s been over 6 years since I screamed in that specific tonality and knew it would be special. We decided to write all the songs on ‘The Awakening’ based on synth beatlines. We wanted the beat of the song to tell the story before I even laid down the vocals. I can say it’s been a massive learning experience writing like that and I found it super refreshing! I also wanted to focus on the sound all the fans are used to and loved throughout the band’s past 11 years. When you listen to the EP as a whole you will instantly feel VE nostalgia with a fresh twist of 2021! I wanted an album my fans would love but also wanted to keep things up to date and fresh feeling. Nothing is worse than dated rock music!”

In other news, Vampires Everywhere! have also announced an October tour with Assuming We Survive, The Bunny The Bear (select dates), and Fate Destroyed:

Vampires Everywhere! will be reuniting for this year’s Summit Music Fest. The event, which is scheduled to take place at Summit County Fairgrounds Arena in Akron, Ohio on July 30, 2021, will also feature: Saving Abel, The Bunny The Bear, The Convalescence, City Of The Weak, Eclipsica, and Audience Of Rain. Vampires Everywhere!’s Michael Vampire commented:

“I am beyond excited to announce Vampires Everywhere will be taking the stage again. I put so much blood, sweat, & tears into this project! It’s honestly a fantastic feeling to be revisiting something that brought so much hope to people. After launching the new VE Instagram & seeing the love the band had received, I felt it was the right time to resurrect an old friend. That being said, I don’t exactly know what else is in store for the band. But, I can assure you it will be done right. We’ll be playing music from “Kiss The Sun Goodbye”, “Hellbound & Heartless”, & “Ritual” plus some surprises!” 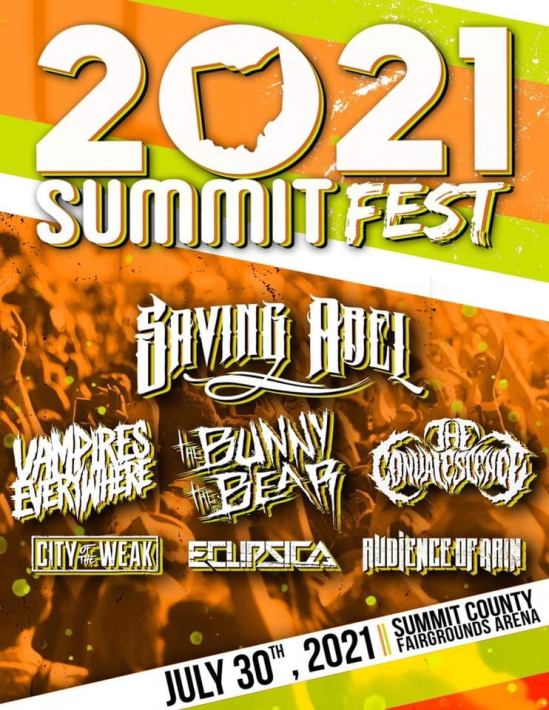 Vampires Everywhere! have premiered a new video for their song “Truth In You.” This song is from the band’s latest album, “Ritual,” which is available now.

Vampires Everywhere! have premiered a new video for their song “Perfect Lie.” This song is from the band’s new album, Ritual, which will be released on March 18.

Vampires Everywhere! are streaming their cover of Hozier’s “Take Me To Church,” via Bloody Disgusting. This song features special guest Alex Koehler (Chelsea Grin), and it will be on the band’s new album, Ritual, which will be released on March 18.

Vampires Everywhere! have premiered a new song titled “Black Betty,” via Revolver. This song is from the band’s new album, Ritual, which will be released early next year.