UFO have officially announced their final tour. The band’s last-ever show will take place at the Fuzz Club in Athens, Greece on October 29, 2022.

“After so many years with countless highlights, fantastic experiences and lots of beautiful memories — as well as some difficult moments, naturally — it’ll be a worthy finale to say goodbye to your fans in person. I know that there are bound to be some very emotional moments on both sides.”

UFO guitarist Vinnie Moore has tested positive for COVID-19. He said the following about that:

“I was recording some new songs a couple weeks back and was going to post about it, but started not feeling so well and unfortunately tested positive for covid. Feeling better now but have been really tired. In fact, I have become a world champion at napping….. which is frustrating because I hate napping. Biggest waste of time ever. 🤣 Be careful everyone, and Happy Holidays. I’ll be back soon with music news. ta vm”

Bassist Pete Way has sadly passed away at the age of 69. Way was a founding member of UFO and Waysted and he also previously performed with Ozzy Osbourne and more.

He sustained life threatening injuries in an accident two months ago but fought hard until finally succumbing to those injuries at 11.35am BST today. His wife, Jenny, was at his side.

Pete Way was a much loved and highly regarded figure among rock fans, critics and fellow musicians alike. Best known for his work with UFO, Pete’s energetic live performances were at the heart of the band’s countless world tours. His melodic bass lines underpinned the catalogue of enduring rock classics upon which UFO’s reputation and legacy were founded. Pete’s post UFO work included collaborating with “Fast” Eddie Clarke from Motörhead – the two putting together Fastway with Humble Pie drummer Jerry Shirley and bassist for his long time friend, Ozzy Osbourne. He then put together his own band Waysted. Pete’s keen ear for song arrangements have also seen him serve as producer for popular hard rock acts such as Twisted Sister and the Cockney Rejects. Pete had recently finished a solo album, “Walking On The Edge” with producer Mike Clink (Guns n Roses “Appetite For Destruction” amongst many more.) He had a biography published “A Fast Ride Out Of Here” in 2017 and an album “Amphetamine” which is currently out on Cargo Records.

Pete is survived by two daughters, Zowie and Charlotte and his younger brother, Neill.”

Ex-UFO guitarist Paul Chapman has sadly passed away at the age of 66. His son issued the following statement:

“It is with a heavy heart writing this, today is my dads 66th birthday. He passed away earlier this afternoon. He was a brilliant, energetic, loving and most carefree person and the First man I ever loved. Everyone he came in contact with loved him. no ADORED him. will keep everyone posted on his celebration of life. I appreciate everyone’s thoughts and prayers as his family grieves and processes everything at this time. I love you Dad. So much.”

UFO have added a February U.S. leg to their “Last Orders” tour. Here’s the dates:

During UFO’s set at the Megacruise pre-cruise party event at the Avalon in Hollywood, CA last night (October 12), the band were joined onstage by Metallica’s Kirk Hammett. You can see fan-filmed footage of them performing “Doctor Doctor” and “Shoot Shoot” below:

UFO have announced that guitarist/keyboardist Neil Carter will be rejoining the band for the remaining dates on their “Last Orders” tour. He will be taking over for Paul Raymond, who sadly passed away earlier this month.

“On April 13th 2019, the UFO family got the tragic news that our bandmate Paul Raymond had died of a heart attack. It had been just a week since we finished the first leg of our “Last Orders Tour” in the UK. While mourning his loss, sadly we also had to face the reality of what to do with the band. We feel moving forward with the tour is the right thing to do. We all know this is what Paul would have wanted us to do. We are therefore very pleased to announce that our friend and former bandmate Neil Carter has agreed to join us again and take over the keyboards/guitar and vocals slot for the remainder of the tour. Neil was already part of the family between 1981 and 1983, playing on the albums “The Wild, The Willing And The Innocent”, “Mechanix” and “Making Contact”. Before he joined UFO he was in Wild Horses, later he continued his career with Gary Moore. Together with Neil, we will bring our 2019 LAST ORDERS TOUR to a close. We want to make sure that all our amazing fans get a fantastic experience out of it one more time.”

UFO keyboardist/guitarist Paul Raymond has sadly passed away at the age of 73. His death was the result of a heart attack.

“Hi to all the fans and people who knew Paul! This is Sandra, Paul’s life partner speaking: With a desperate and broken heart, fully in tears and pains that feel like they will kill me I have to tell you that my most beautiful and beloved darling Paul Raymond has passed away today. The doctors we’re trying to reanimate him and with success at first but then his system shot down again and there was nothing more they could do for him, he died of a heart attack.

He absolutely enjoyed the last couple of weeks touring with UFO in the UK & Ireland and he was looking forward to the rest of this year’s tour.

This photo was taken last Wednesday when we checked out of our last hotel before coming back to Germany!

I will always love him and I hope he will rest in piece until I’ll see him again on the other side!!!

I love you so much Paul 💔😪 Sandra”

Last year, UFO frontman Phil Mogg revealed that he will be retiring after the band’s 50th anniversary tour. Now, the group have officially announced the dates for their final U.S. tour. Here’s where you can catch them: 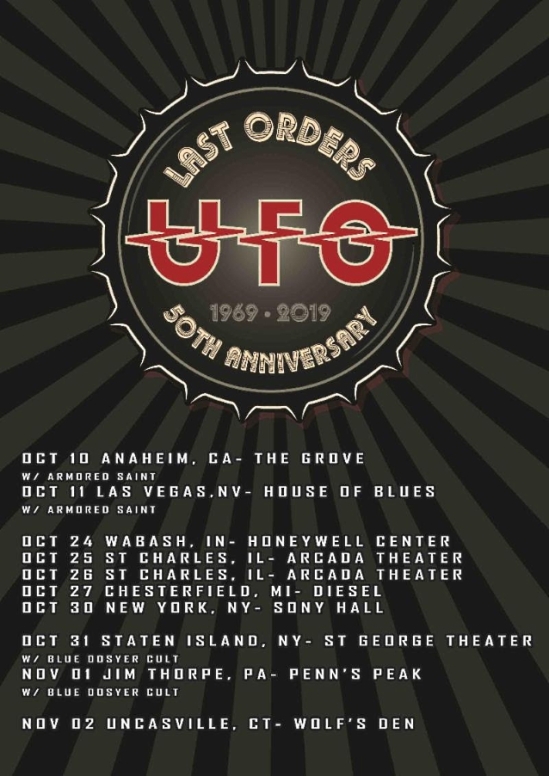 Phil Mogg has revealed that UFO’s 2019 50th anniversary tour will be his last. The group will be heading out on one “final tour of the UK and will also play some shows in selected other cities that the band has a strong connection with.”

Phil Mogg has confirmed that next year’s 50th anniversary tour with UFO will be his last as the frontman of the long-running hard rock band. Consequently, it seems almost certain that at that point they will cease to exist. UFO were formed in London in 1969 and Mogg is their only ever-present member, performing on all of the group’s 22 studio albums.

“This decision has been a long time coming, I’ve considered stepping down at the end of UFO’s previous two tours,” Mogg explains. “I don’t want to call this a farewell tour as I hate that word, but next year’s gigs will represent my final tap-dancing appearances with the band.

“2019 marks UFO’s 50th anniversary, so the timing feels right,” he continues. “There will be a final tour of the UK and we will also play some shows in selected other cities that the band has a strong connection with. But outside of the UK this won’t be a long tour. Being out on the road isn’t always tremendously luxurious and although the playing is as great as it ever was, the stuff that surrounds it becomes very tiresome. I always told myself that when I reached that stage I would step down, and that’s what I’m going to do. This is the right time for me to quit.”

Mogg turned 70 back in April and although his voice remains strong, he admits that age played its part in his conclusion.

“I’m a big reader of obituaries, and my finger always goes down to: ‘I wonder how old they were…’,” he chuckles. “The last few years have been tough, losing Lemmy was awful and I was sad that Jimmy Bain passed on a cruise ship. That distressed me quite a lot.”

While many veteran bands in such a position simply cease playing live and continue to record, UFO will no longer be releasing new music. Last year’s covers collection ‘The Salentino Cuts’ is set to become a signing-off point, though Mogg insists that however unlikely the prospect might seem – the singer is a lone strand of consistency throughout a 50-year history – he would have no problem with UFO continuing with a replacement.

“I’ve told the guys that this is how it is,” he says. “They know it’s my time to go and they know that they can do whatever they want to do without me but I don’t want to play live or make records anymore, though having said that I might go on and do an album of my own. I’ll have to see how I feel about that.”

Of course UFO have either split up, retired or gone on hiatus several times before but Mogg is keen to make the distinction that next year’s dates don’t just mark the end of his touring commitments with UFO – for Phil, there will be no further concerts of any kind.

“For me, this is the end of my stint with UFO,” he clarifies. “This is a line in the sand. I’m suggesting we call the tour ‘Last Orders’, though I also like ‘The Bar Is Closing’. I’m also tempted to name it ‘The Drinks Are On Parker’,” he chuckles, referring to long-suffering sticksman Andy Parker.

You’ll have gathered that Mogg is not about to slash his wrists anytime soon. Of course he is sad that the finishing line is now within sight but has had sufficient time to live with and process such a massive personal decision.

“Maybe the best word to use is ‘bittersweet’,” he concludes. “But my time has arrived and all that remains is to make sure that we have a good tour.”