A rare 1999 Ozzfest documentary, called “We Sold Our Souls for Rock ’n Roll,” recently surfaced online and is available to view below. The film, which was directed by Penelope Spheeris, received some limited screenings in 2001, but it never received a wide release.

DevilDriver and Wednesday 13 have been added to the special New Year’s Eve edition of Ozzfest. They will be joining Zakk Sabbath on the outdoor second stage. The event will take place at The Forum in Inglewood, CA on December 31 and the main stage will feature Ozzy Osbourne, Rob Zombie, Marilyn Manson, Jonathan Davis (Korn), and Body Count. 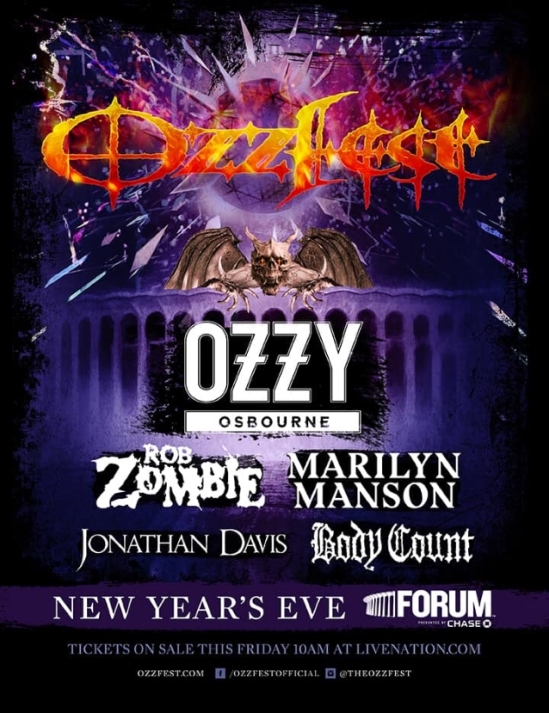 Ozzy Osbourne has announced a special New Year’s Eve edition of Ozzfest. The event will take place at The Forum in Inglewood, CA on December 31 and it will feature Osbourne, Rob Zombie, Marilyn Manson, Jonathan Davis (Korn), and Body Count. According to Rolling Stone, there will also be a second stage featuring Zakk Sabbath and more to be announced. Osbourne commented:

“I asked Sharon what we’re doing this New Year’s Eve and she said ‘WE’RE DOING FUCK ALL! So I thought ‘we didn’t do Ozzfest in 2018, so let’s do a New Year’s Eve Ozzfest.’”

“What better way to celebrate New Year’s Eve than with some of the greatest performers in this genre and our longtime friends Rob Zombie, Marilyn Manson, Jonathan Davis and Ice-T“

It looks like an Ozzfest event is being planned in the New York area. Ozzy Osbourne tweeted the following:

Who would like to see @TheOzzfest happen in the New York area this year? Post your answers at https://t.co/DzSdT9zuhQ #Ozzfest2018 pic.twitter.com/FXiu6TTYBk

According to TMZ, Ozzfest organizers are suing the OZY Fest, which took place in Central Park in New York City, NY back in July. The lawsuit says organizers originally sent the OZY Fest a cease and desist letter, due to the event’s name and logo being too similar to Ozzfest, leading to some confusion. They apparently ignored the letter claiming OZY Fest was a “media-focused event”, rather than a concert. Now, Ozzfest is trying to stop the name from being used again, and is also seeking profits from that July festival.

An official Ozzfest pop up shop will be opening at at the KCAL 96.7 station at 1940 Orange Tree Lane, No. 200 in Redlands, CA on October 14. The store will have Ozzfest, Ozzy Osbourne, and Black Sabbath merch, as well as $20 Ozzfest tickets, music, food trucks, and prizes. Ozzy and Sharon Osbourne will also make an appearance.

An official Ozzfest pop up shop will be opening at the Hollywood Palladium in Los Angeles, CA on September 28, the same day Black Sabbath‘s new film, “Black Sabbath: The End Of The End,” will hit select theaters. The store will have Ozzfest, Ozzy Osbourne, and Black Sabbath merch.

Come by the #Ozzfest Pop Up Store at the @HollywoodPalladium on your way to see @BlackSabbath: The End of The End at @ArcLightCinemas Hollywood (or another theater) and get a chance to pick up something from the remaining #TheEnd Tour Merch or classic Ozzfest & @OzzyOsbourne Merch from our #Ozzy Pop Tent! There will be specially priced $20 Ozzfest 2017 Tickets available from the Palladium Box Office Window for these 5 HOURS ONLY! That's 12 Hours of #Ozzfest for only $20 BUCKS! We'll have a few food trucks to chow from plus the @955KLOS Truck with @FullMetalJackie DJing tunes! Come down and hang out!!

The lineup has been revealed for the 2017 Ozzfest Meets Knotfest. The event will take place at the Glen Helen Amphitheater & Festival Grounds on November 4-5, with Ozzfest set for day one and Knotfest set for day two.

“’Ozzfest Meets Knotfest‘ is coming back for another round. Last year we had over 75,000 people attend and we have another great lineup this year with Ozzy’s first solo show in L.A. in more than six years. This is not just another show…it’s ‘Ozzfest Meets Knotfest‘! And this year’s event means the world to me as we’ll be amongst friends like Prophets of Rage, Rob Zombie, Deftones, Marilyn Manson and Stone Sour…it’s going to be another amazing weekend.”

“‘Knotfest‘ was never supposed to be exclusively about Slipknot. It was always about the things that fueled the spirit of Slipknot: music, art, passion, insanity, and the tribes that give it power. So it would make sense for Knotfest to carry on these ideas, even without Slipknot.

Because these things are the gasoline of creativity, and there’s plenty to go around, with plenty of great bands, acts and things to see. Teaming up again with Ozzfest means another weekend of the biggest, baddest, loudest and best. I hope you all will join us; it’s going to be (sic).”

“It’s that incredible time again where Ozzfest and Knotfest meet up to bring all music fans together for two days of Rock and Roll. Let’s not forget the beautiful culture we are involved in and the history that is being written. Join the true passion of our concepts. I’ll see you there. Stay (sic).”

The 2017 Ozzfest Meets Knotfest is set to be announced on July 10. The event is expected to take place in San Bernardino, CA like last year.

Brujeria have been added to Ozzfest Meets Knotfest, which is set to take place at the San Manuel Amphitheater in San Bernardino, CA on September 24-25. The band’s set will take place on September 24. In other news, Armored Saint, Havok, Exmortus, and Thrown Into Exile have been booked for the kickoff party on September 23.

@Brujeria_oficial have been added to the #Ozzfest 2016 lineup! Get your tickets now at http://bit.ly/OzzTix

As if the inaugural pairing of OZZFEST MEETS KNOTFEST–the biggest metal festival in North America EVER–wasn’t enough…campers for this double-header music and lifestyle weekend like no other on the planet will now get the bonus of an exclusive free Friday night camping kick-off party. The September 23 pre-festival concert will give campers early access to the campsite, allowing them time to prepare for a night of performances from @theArmoredSaint, @HAVOKbandofficial, @Exmortus_official and @ThrownIntoExile. VIP camping lines open at 4:00 PM, General camping load in begins at 5:00 PM. Doors to the Friday camping kick-off party at 7:00 PM with Live music set to kick off at 8:00 PM and end at 11:00pm Camping Tickets Available at http://bit.ly/OzKnotCamp Tickets to Ozzfest Meets Knotfest http://bit.ly/OzKnotTix The updated line-up for #OZZFEST on Sat Sept 24th is as follows: LEMMY STAGE: @BlackSabbath, Disturbed, @Megadeth, @OpethOfficial, Black Label Society, and @RivalSons. SECOND STAGE: @SuicidalTendencies, Hatebreed, DevilDriver, Goatwhore, Huntress, and Allegaeon. @NuclearBlastUSA STAGE: Municipal Waste, Brujeria, Kataklysm, The Shrine, and Still Rebel.