During an appearance on The Jasta Show, Howard Jones offered more of an explanation for changing Devil You Know’s name to Light The Torch. The main reason was due to issues with the band’s former drummer John Sankey.

“First off, it sucks to have to go through all this. I mean this goes without saying. I mean dropping incorporated stuff and trademarks…

Without going deep—because, I mean I don’t have social media because I really don’t care to tell my business to people—However, there’s really no way to avoid not telling to some extent what happened.

So it basically goes down like this. A lot of things that led up to… Let’s see, like, the summer of last year. It had got to the point where our drummer [John Sankey]—there was a lot of issues. He had been… We had had some fill-in drummers because we were just trying to deal with some internal stuff.”

“He wasn’t out of the band at the time… We had some fill-in drummers because we were trying to deal with internal stuff. And then… Should I just go to the email chain and read this? ‘Cause it would be a lot easier.”

“I’ll simplify it, god cause I hate talking, you know I don’t care about talking about stuff like this.”

“Here it is, it’s like OK, we were having troubles with him and he was doing stuff. So we’re like: ‘Okay, well we’re gonna get a fill-in drummer, deal with what you need to deal with, but things are getting weird, but we gotta keep touring.’

So we gotta kept touring. Then we fired him. And we had to fire him by email because we just couldn’t reach him. We fired him and then it’s like: ‘Look, we got this tour coming up, we’re going to have to make an announcement that we need a new drummer.

So he then proceeded to email and said: ‘No, you can’t put that up without it going through me or my attorney first.’ So we fired him on the 22nd and on the 24th he put out a press release on PRP or whatever, saying that he had decided to step down and move back. Nah, you got fired man.

And we just sat on it for a year because we didn’t want drama. So a year later we are still dealing with this guy trying to buy out his portion, because he had a portion of the name just like all of us, so we tried to buy his portion, he came up with a figure, we said ‘alright, we’ll cut a check.’…”

“It was just the fact that… We were to the point where we had to fire him. Because just everything had acculumated. But then, when he put out a press release [a couple days later] that he stepped down and was like ‘Now I’m gonna focus on the festival’ [at the time Sankey was involved with the failed ‘Legion Music Fest‘] it was like: ‘Dude that’s not how it went down.’ So we just didn’t say anything because I just don’t care about drama. The last thing I’m gonna do is a press release, when do you see me put out a press release?”

“Just the fact that he put out that press release and it was just so much false information and it kept going a year later. And it was finally like: ‘Dude, we’ll buy you out, what number?’ He gave a number, ‘Alright, we’ll cut a check’, he then said ‘Nah I don’t think so, I want to keep hold of it.’

It’s not that… We could have kept using the name, but just not with him. And it’s not a matter of percentage, it’s like if Fran [Francesco Artusato] left the band I’d give him his percentage because that’s him, it’s fine. But it’s just, there was just too much.”

Devil You Know have offered an explanation for changing their name to Light The Torch. The main reason was due to “member issues and legalities .”

“After member issues and legalities continued for a year with no end in sight, we collectively felt it was time to put DYK to rest. Every effort was made to avoid this decision, but it needed/had to be done for the sake of moving forward. We will be forever grateful to those of you who shared that journey with us.

With that said, we decided that this was a perfect time to write and record something truly different, something that reflected what we have been through and what we have become. Our new album is almost done being mixed, and there will be many more details coming in the following days and weeks. We are LIGHT THE TORCH. See you soon.”

“LIGHT THE TORCH will absolutely continue to perform Devil You Know songs and, the only way to legally continue would be under this course of action.”

The band’s new album will be released this year via Nuclear Blast.

Devil You Know have apparently changed their name to Light The Torch. The band said the following:

“We have officially changed our name to LIGHT THE TORCH! A full statement will be made soon and a new album is very close to being completed. It’s a new beginning and we couldn’t be more excited.”

Devil You Know have announced a new partnership with Legally Armed America, which is a pro-gun TV program and web community. As part of the deal, the band will have their music featured in the network’s content. More info is available HERE. 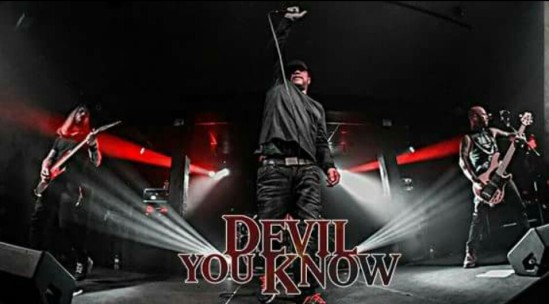 “The band’s collaboration produces music that is dense, forceful, and brimming with raw urgency. We see the same passion in what Paul Glasco does on Legally Armed America. I speak for each of the band members when I say we’re ardent supporters of the shooting sports lifestyle, and zealous Second Amendment supporters. We’re pleased our songs are woven into the Legally Armed America show, and see our presence as an extension of our support for firearms and the outdoors.”

Devil You Know have revealed that Nick Augusto (ex-Trivium) will be handling the drumming duties for the band for the rest of 2016. Devil You Know posted the following:

“We are excited to announce that Nick Augusto will be playing drums for us for the rest of the year!!!”

John Sankey has officially exited Devil You Know. This news comes after the drummer missed multiple tours with the band, so he could focus on his upcoming festival in Australia.

“We have decided to part ways with drummer John Sankey and will be back on the road this fall. We are NOT taking any unsolicited drummer audition videos. Big news in the coming weeks!!!”

“After communications over the last few weeks, my band Devil You Know and I have decided that I move on from my role as drummer.

I’m currently working on establishing the Legion Open Air Music Festival in Australia and with imminent major announcements coming in the near future I simply no longer have the time to commit to both projects.

I have lived abroad in Los Angeles for 15 years dedicating 100% of my time and energy on my career as a touring musician and have lived out my dreams performing all over the world.

I am now ready to pursue other avenues and am very excited for a change where I can use my experience and knowledge of the industry to help provide the Australian metal and hard rock scene with a new live music platform.

I’m extremely proud of being a founding member of Devil You Know and will always respect what we have achieved, it’s been an awesome ride and I wish Hojo, Fran and Womby nothing but the best as they continue to kick ass into the future!”

Devil You Know have revealed that Nick Augusto (ex-Trivium) will be handling the drumming duties for the band on their upcoming tour with Hatebreed and DevilDriver. He will be filling in for John Sankey, who recently took a leave of absence to work on the Legion Music Festival.

Devil You Know are extremely excited to officially welcome renowned ex-Trivium drummer, Nick Augusto (see attached photo), to the band to handle duties for the band’s upcoming tour with Hatebreed and DevilDriver starting this Friday, May 13th. Either see below or head over to https://www.facebook.com/Devilyouknowofficial for all tour dates and additional information.
Francesco Artusato (guitars) states: “We are very excited to start this next tour with Nick. I toured with him in the past and I’m really looking forward to play some great shows with him.

“We also are just wrapping up our first nationwide headlining tour with ONI, which has been going extremely well. We are red hot and firing on all cylinders, so we can’t wait to join up with the mighty Hatebreed and Devildriver to play in front of some new faces, as well as many familiar ones. Be sure to come by our merch booth after the set to check out all new items and hang with us. Lets do this.”

Augusto further adds: “I’m honored to be on-board as DEVIL YOU KNOW’s touring drummer for this massive Hatebreed and Devildriver tour. As being a fan of everyone in the band’s previous projects, I feel like my style will add another piece to the already growing expansion of their big, heavy and catchy sound. I am very excited to play their material live and see the reaction of their fans, and what kind of energy surfaces from these upcoming shows! Come out and have a good time with us. See you out there.”

John Sankey will be sitting out Devil You Know‘s upcoming headlining tour. During his abscence, John Boecklin (ex-DevilDriver) will be handling the drumming duties.

“DYK fans, I will be sitting out our upcoming US headline tour due to commitments I have in Australia as Ambassador and Co-Founder of the Legion Music Festival taking place in January 2017. It sux to miss playing these shows but being part of planning and overseeing the launch of a national music festival is an enormous task which requires all of my time and dedication right now.

Unfortunately Dave Grohl isn’t available to fill in, but don’t fear, my good buddy and drummer extraordinaire John Boecklin will be hitting the road with Hojo, Fran and Womby to rock the kit for you all each night… F#%k yea! I’ll be back from the land down under to rejoin my metal Brothers for our tour with the mighty Hatebreed and DevilDriver in May/June. See ya all on the road then” \m/”

“Being a fan of DYK and its members individually, I’m beyond honored to fill in for John Sankey. Having been working on my management career and new musical project, this will be great opportunity for me to take a break and have some fun playing on stage again. I look forward to seeing friends and representing DYK behind the kit, so come on out these shows and support this heavy ass band.”

Devil You Know have announced a 2016 headlining tour. The band will also be joined by special guests Oni.