As previously reported, Josh Woodard recently exited A Day To Remember after past sexual misconduct allegations resurfaced online. Now, another disturbing incident involving the bassist has come to light. Back in 2017, Woodard, who was 30 at the time, was involved in a serious car crash in Florida that resulted in the death of a 24-year-old man named Bryant Gonzalez Ortiz. 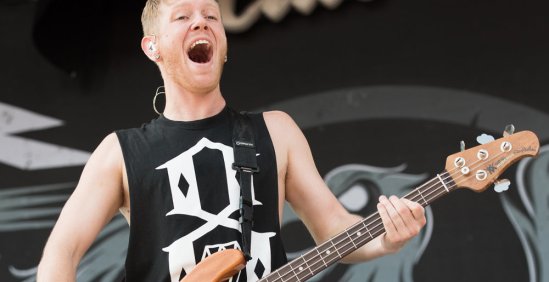 Loudwire have obtained “numerous legal documents” regarding the accident, but they were “were unable to locate any official explanation as to why he was never arrested or served any jail time or why his charges were so minor despite the severity of the situation.”

According to a Vehicle Homicide Investigative Report, Woodard was driving a 2016 Tesla Model S in Palm Beach County when he “suddenly and unexpectedly crossed over three lanes of traffic and crashed head on into the driver’s side of” Ortiz’s 1993 Honda Civic. Ortiz, who was stopped at a shopping plaza exit waiting to turn, died at the scene, while Woodard only sustained minor injuries. Vehicle Homicide Investigator Alan Soloway added:

“I met with [Woodard] and observed his eyes to be red, he appeared dazed and he had urinated himself. [Woodard] stated his attorney was on the way to the scene and he refused to speak with me prior to his attorney arriving.”

“The report goes on to say that due to Woodard’s lack of cooperation, the detective was unable to conduct an in-depth impairment assessment to determine if his observations were due to impairment or a reaction to a crash of this magnitude. The report noted that no impairing substances were found in Woodard’s car.

Woodard’s attorney, Paul Walsh, arrived on the scene and informed police that Woodard would not be providing a statement and also declined the investigator’s request to submit a voluntary blood sample.

Investigators found no defects in either vehicle that would have caused the crash and reported that based on vehicle damage and crash dynamics, speed did not appear to be a factor. The report also indicated that weather was clear at the time of the crash.

The Vehicle Homicide Investigation Report concluded that Woodard was in violation of careless driving and failure to maintain a single lane.”

About a month later, Woodard returned to the road with A Day to Remember, before his attorney entered a not guilty plea in an October 30, 2017 court filing. An order from that date said the following:

On December 6, 2017, Woodard went to court and pleaded no contest to careless driving. He was found guilty and was stripped of his driver’s license for 12 months. He was also issued a $1,000 fine and was ordered to pay $106 in mandatory court costs.

On May 10, 2019, Ortiz’s father, Fernando Gonzalez, filed a wrongful death complaint against Woodard, demanding judgement. He was also seeking “damages in excess of [$15,000], plus costs, and all other relief deemed just and proper under the circumstances, and demands a trial by jury of all issues triable as a matter of right by a jury.” However, on April 13, 2020, he dismissed the lawsuit with prejudice.

Loudwire reached out to a representative for Woodard, but they declined to comment.

Josh Woodard has announced his departure from A Day To Remember. The bassist exited the group after past sexual misconduct allegations recently resurfaced.

“In the summer of 2020, I released a statement addressing false allegations that were made against me online. At the time, with the pandemic and my daughter on the way, I personally decided to pause legal proceedings against the accuser once the post was removed.

These accusations have unfortunately resurfaced within the last few days, and I must act accordingly. It is not fair to my bandmates and brothers to be attached to or targeted because of any of this, so I have made the decision to step down from my position in the band as of today. I will be leaving tour to be with my family and continue to defend my innocence in these matters.

I know who I am and who I am not. I admit, wholeheartedly, that I am not a perfect person and I have made mistakes in life. I strive every day I am given to be a better person, husband, father, bandmate, and friend.

I appreciate those who have supported me and defended my name against the lies being spread, and I am sorry to those who have been negatively affected by them. This decision is the furthest thing from what I want, but it is unfortunately what is best. Being a member of ADTR has been the greatest honor and I am so thankful for the past 18 years.”

A Day To Remember’s Josh Woodard has been accused of sexual misconduct. One of the allegations, which has since been deleted, came from a woman who said that the bassist had sex with her about 10 years ago when she was only 16. However, Woodard has denied the accusations.

“I’d like to address the allegations against me that have circulated around the internet in recent weeks.

First, let me be clear that the events described never happened and these allegations are false.

Up until now, I have remained silent because I do not feel it is appropriate to handle or debate this situation on social media. Addressing this is my personal responsibility, and I have chosen to defend myself through the proper legal channels.

Aside from releasing this statement, I will continue dealing with this matter privately in order to protect myself and my family.