Pentagram have parted ways with drummer Pete Campbell. As a result, their Latin American tour has been postponed.

“We wanted to take a moment and give an update. The most recent tour postponement of South America was due to logistics within the band. Pete Campbell, who has been with us since the recording of Curious Volume in 2015 has decided to step away from the band to spend more time with his family.

‘The last 5 years have been quite a ride. I’m most grateful to all the fans and friends I’ve met on the road, but it’s time to step away and be with my family’. We’ll see you in the next chapter! Love PETE!

We thought it would be best to postpone the tour and regroup. More info to come soon.

Here are the new dates with a few more to be added!

See everyone very soon and thank you for your continued support!” 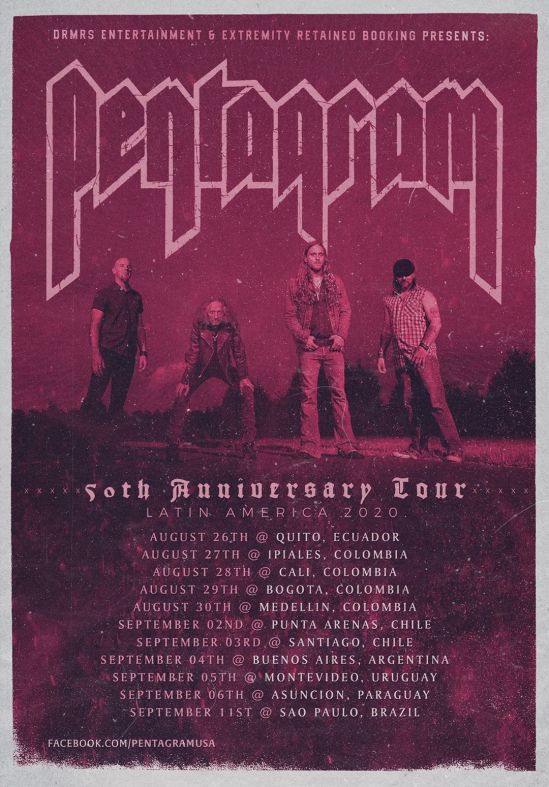 Pentagram have announced a fall headlining tour. You can find the dates for that run below.

Pentagram have announced some June U.S. shows with Brother Dege and Dirty Streets. Here’s the dates:

Pentagram have announced a March tour with Brother Dege and Dirty Streets. This will be their first run with Bobby Liebling since he was sentenced to 18 months at the Montgomery County Detention Center in Rockville, MD in 2017 for physical abuse and neglect of a vulnerable adult-custodian.

Experience a high volume delivery of their revered hard rock & doom metal classics that cover their near half-century career. This relentless setlist is sure to shine a blue light on Liebling’s pioneering “First Daze” favorites.

It was previously revealed that Pentagram’s Bobby Liebling is serving 18 months in Montgomery County Detention Center in Rockville, MD for physical abuse and neglect of a vulnerable adult-custodian. Now the band’s bassist, Greg Turley, has commented on the situation.

“2015 and 2016 were the busiest years ever for Pentagram. New album and a full tour cycle kept us busier than ever and taking us to places we’ve never been and playing bigger shows than I ever imagined. November 2016, Gothenburg, Sweden I knew something was ending, I just didn’t know what…. Dealing with Bobby and his reoccurring demons was bringing us all down.

Same story from the past, I know. Honestly, I thought Bobby would end up dying before we played another show. Turns out, he didn’t die, just went off the rails (drug induced) and ended up assaulting his mom. Pretty much the worst thing someone could do in my opinion. He assaults the one and only person that has always taking up for him? Wow! Just horrible.

He’s now serving time in prison. Looks like he’ll be there for the next 12-18 months. That’s a lot of time to reflect on bad decisions and bad habits.

The last six months have been quite a ride, continuing on without Bobby was an easy decision. Fans, investments and commitments all needed to be satisfied so we marched on. The positive support we received, especially from those who have attended the live shows has been truly amazing. Sucks to be put in this situation but we’ve made the best of it and exceeded even our own expectations.

Don’t know exactly what the future holds BUT the music of Pentagram is much larger than the individuals. Just look at the list of people that have been involved!!! Not only have I had the opportunity to be a part, I’m also one of the biggest fans. I mean, I truly never get burned out on these songs, from Forever My Queen to the last note on Curious Volume. I love them all…

The “Bobby IS Pentagram” argument baffles me. There is and has always been a great team behind Bobby steering this whole ship and moving things forward, so there is definitely light beyond this. Sorry to disappoint everyone who thinks Bobby steers the ship… I’ve been fortunate to be the constant for the last 8 years and involved since 1993.

There still is an inner drive to move forward and bring the music to whoever will listen. I would love to have Bobby at the front of the stage more than you know, but by his own actions/mistakes, he’s removed himself.

I’ve been to visit Bobby and keep in regular contact with him. He seems to understand that he “messed up”. Now, he’s got some time to clean up, work out his demons and try to make things right.

What’s next for us? I look to keep moving forward…Thanks for reading and THANKS for your support.”

Pentagram have announced that they will be heading out their European tour without Bobby Liebling, due to him being in a “detention center.” This news comes after the band previously performed without him due to his “personal actions.” According to records from the District Court Of Maryland, Liebling was arrested for first-degree assault and one count of physical abuse of a “vulnerable adult,” as well as two counts of abuse against a “vulnerable adult.”

“As was the case for the recently completed US shows, vocalist Bobby Liebling will not appear with Pentagram for previously booked European dates this summer.

To elaborate, Bobby called on April 17 saying he had been admitted to the hospital. He called again on April 19, this time after being transferred to a Maryland detention facility. He’s now awaiting a preliminary hearing at which time it will be determined if a follow-up on any alleged charges are necessary. An update will be published when information is available. The band will be fulfilling all currently booked appearances with 36-year mainstay guitarist Victor Griffin performing all vocals.

A PERSONAL NOTE FROM THE BAND

The outpouring of support on our recent US dates was outstanding! Your energy was matched ten-fold and encouraged us to carry on and deliver what many have called, even by skeptics, some of the best Pentagram performances they’ve seen. Thank you!

We have the best fans in the world and if not for you, the legacy of this band would have died long ago. We won’t let you down now. The music lives on and as we move forward, we reiterate the lyrics of “Curious Volume“:

“In this venture death waits in the shadows, but in survival the volume won’t die!”

Pentagram have announced that Bobby Liebling will not be joining them on their upcoming tour dates. The band have chosen to leave him behind due to his “personal actions.”

“Due to circumstances that are beyond anyone’s control, that are a direct result of Bobby Liebling’s personal actions, he is unfortunately unable to appear alongside Pentagram for the spring string of East Coast concerts. The 4 dates affected are April 20th – Baltimore, MD, April 21st Richmond, VA, April 22nd New York City and April 23rd, Cambridge, MA.

Pentagram will be fulfilling these dates and our obligation to the fans and many people who’ve put time and money into setting up these gigs. We ask that you come out to celebrate this band’s legacy and music with us. The FULL LIVE SET performed will consist of classics and fan favorites. Our legendary and iconic guitar player and songwriter, Victor Griffin, will be performing the live vocals. The band will be available before and after the show for meet and greets, photos and questions. We look forward to seeing you at the shows!

Addiction recovery is a daily struggle. If you or your loved ones are affected, Pentagram and Phoenix House strongly encourages you to reach out for help. Phoenix House provides individualized, holistic drug and alcohol addiction treatment with a legacy spanning 50 years. There are facilities in every state of this tour as well as across the country. One can reach out to them at: 1-888-671-9392 or via their website: http://www.PhoenixHouse.org

Pentagram have premiered a new video for their song “Curious Volume.” This song is the title track of the band’s latest album, which is available now.

“We wanted our first ever video to, in-a-way, be a connection to the past as well as the present. The song can be interpreted as a personal and collective journey that we’ve been on for close to half a decade.

It’s a trip that’s both physical and mental and I feel that Dave‘s end result illustrates that for us and everyone. The video stands as both an escape and an introduction to us as artists and people. You can feel the rigors and rewards of tour life through the visuals.

We love the stardust and psychedelics as well as the raw rock-n-roll energy felt throughout the song and video alike. We hope you connect with it like we do.”