Lost Origins, the new band featuring Brandon Butler (ex-Veil Of Maya), along with ex-members of I Declare War, have released two new songs titled “I Float Away” and “Life Fall.” You can check those out below:

In a new interview with Metal Sucks, Veil Of Maya guitarist, Marc Okubo discussed the departure of vocalist Brandon Butler. He also talked about why the band chose to have new vocalist, Lukas Magyar sing clean vocals on their new album, Matriarch.

Here’s what he said about Butler’s departure:

“It kind of happened while we were on the Mayhem tour. I was asleep — I slept through all of this — I guess it was a drunken argument that got out of control. I think it was about cleaning the bus, actually. I think there were a bunch of soda cans everywhere. I was asleep when it happened, so I’m probably the worst person to ask. But I know there was a bad argument, it was about cleaning the bus, and then he made some Tweet saying that he wasn’t going to be in the band, or, at least, something that meant it to us. It was right when Mayhem was ending so we just went home and started working on the CD [Matriarch] and he was just out of the band.

We had one more show. We played it. We just went into writing mode. I was already supposed to fly out to go to the studio immediately after the tour was over so I just stayed in that mind-set.

I think when he switched jobs on Facebook, that’s when everybody noticed he was out of the band. Then he came out with a statement and that was before we even knew what to do. We were gonna get a new singer before announcing that Brandon wasn’t in the band. We were planning on just putting new music out and having that be the big surprise like, “Oh! There’s a new singer!”’ So when that got out it was a lot more Internet drama.

Here’s what he said about the clean vocals on Matriarch:

“The music was all written before Lukas joined so that aspect didn’t really change. He has a lot more ideas. It’s like having another instrument – being able to have melodic singing as well as the screaming.

We were going to just use a guest vocalist before but we found a dude who could do both. It worked out really well. I’m stoked to actually start working with him to see what we both can come up with.”

Veil Of Maya have announced some headlining shows, surrounding their appearance at Knotfest. There is still no information about a new vocalist, since Brandon Butler’s departure, so fans will just have to wait and see. 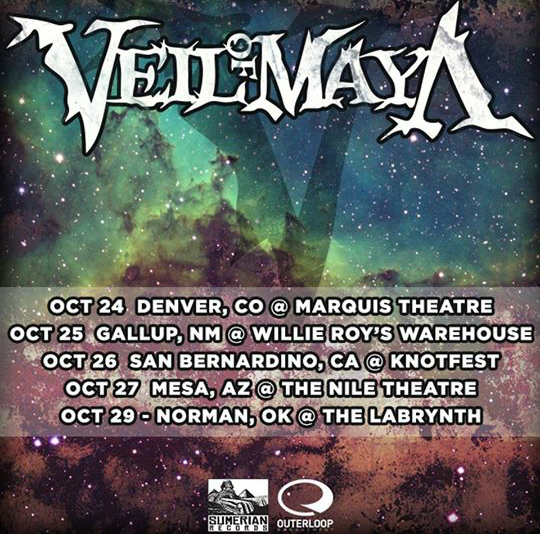 Brandon Butler has now issued a statement about why he left Veil Of Maya. The vocalist claims creative differences were the main reason for the split. Despite leaving, Butler still plans to keep music a part of his life.

He said the following:

“As most of you know by now I am no longer in Veil of Maya. This decision was one of the toughest ones I have ever made in my life. The journey I have had traveling the world and playing for people who want to hear music I helped create is impossible to describe in words. The last 7 years of my life have been one wild ride and there is nothing I would take back about it.

It was a dream of mine to make an impact with my words, even if in just a few lives. I will NEVER stop being passionate for music and writing as it is a massive part of my life. I feel as if I was on the verge of writing some of my best lyrics yet with the VOM guys and wish I could have showed you all.

Marc, Sam, and Danny are currently working extremely hard on some amazing stuff that I know you guys will enjoy. They have a strong vision for how this album should sound and personally and creatively I had a different view from theirs which caused a wedge between us in this last year. I spent 7 years of my life hanging out with those guys grinding it out on the road and will always love them like brothers regardless of how it ended.

It was an adventure with tons of ups and downs. Thank you so much to everyone who was a part of my time with veil. You changed my life for the better! The biggest thing I will miss is sharing experiences and stories with my friends around the world. Thank you for everything you have given me. VOM has the best fans ever! It was an absolute honor sharing the stage with you all and I’ll miss it. Stay fucking metal \m/”

Veil Of Maya have parted ways with vocalist, Brandon Butler. The band have also said that they are almost done with the music part of their new album, and are now seeking a new singer.

They posted the following statement:

“Veil Of Maya has parted ways with vocalist Brandon Butler.

Currently we are hard at work on our new studio album and while the music is almost finished, the hunt for a new vocalist is now on.

We are very excited with how well this album is turning out and cannot wait to release it soon on Sumerian Records. We know that both our long-time AND new fans will be calling THIS their favorite Veil of Maya album of all time.

We want to wish Brandon good luck with anything and everything that he does in the future and thank him for being a part of the band.”