As previously reported, Arkansas state senator Jason Rapert (R) was calling for a boycott of Vinos in Little Rock, AR due to an ad for Eyehategod’s May 24 show at the venue, which featured an image of Rapert eating a baby. Eyehategod frontman Mike IX Williams has since fired back at the senator saying his “moral crusade against basic human rights will be fought at every turn.” 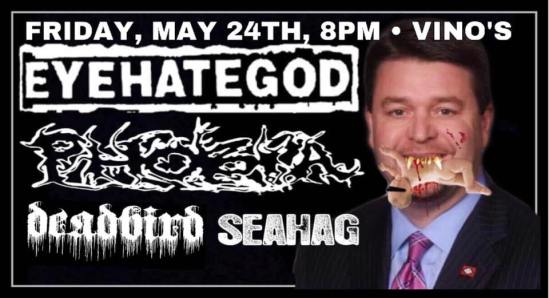 Thank you for all the attention you’ve given the EyeHateGod show in Little Rock, Arkansas. Any image that was used of you is protected under the First Amendment, which supposedly protects us “Americans.”

Arkansas state senator Jason Rapert (R) is calling for a boycott of Vinos in Little Rock, AR due to an ad for Eyehategod’s May 24 show at the venue. The poster features an unauthorized image of Rapert eating a baby.

Friends, I rarely share with you the hateful posts and pictures that extreme liberals make about me to torment my stand for better moral values. But this time I want you to see what they have done. They use my image on an event without my permission and they depict me “biting a baby” in my mouth. A wicked and evil depiction on an event entitled “Eyehategod”.

I call on Vinos in Little Rock to cancel this event and apologize for such a disrespectful image that shows the dehumanization of babies lives. It is disrespectful of all who value babies lives and people of faith. They also clearly welcome the Satanic Temple in another post I am sharing. I urge you NOT to frequent Vinos and stand against their hateful rhetoric.”