Beyond Creation and Inanimate Existence have announced a December Canadian tour. Here’s the dates: 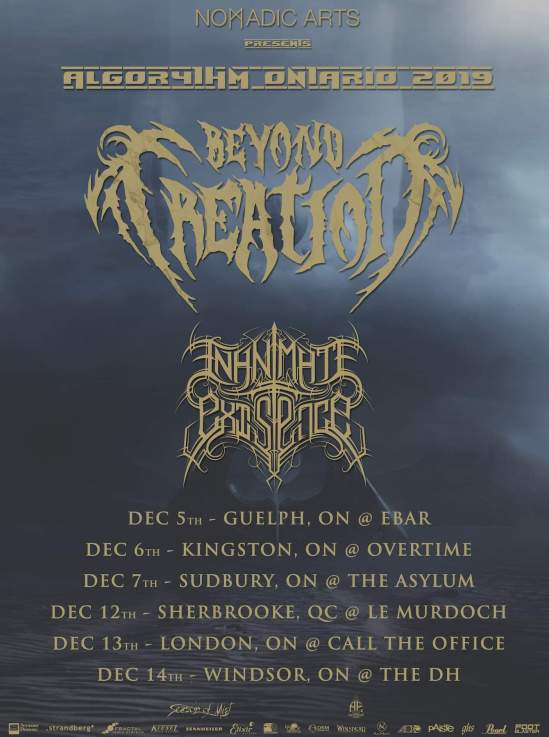 It was previously announced that Inanimate Existence were dropped from The Faceless’ upcoming tour due to “actions that [they] simply cannot stand for.” Now, it has been revealed that the band were referring to a rape accusation against Inanimate Existence’s Cameron Porras.

The Faceless said the following:

“Since this has turned into inevitable internet drama thanks to the metal tabloids, here is the truth. If inanimate Existence aren’t going to come forward after being given the chance and instead choose to make jokes about “vaping”, we will.

Edited from Ken Sorceron‘s original post on his personal fb page to be more blunt:

Getting plenty of messages asking me about this so I’m just going to say this. We (The Faceless) had to drop a band from our upcoming tour yesterday.

The fact is that someone came to me with what began as a compelling story about a terrible crime in which a member of the band that was to tour with us was the perpetrator. That crime was rape. When we asked the member of this band about it we got poorly photoshopped screenshots of a conversation between the member of the band and the victim attempting to absolve him of guilt and make her sound “desperate for attention” that appear to have simply never happened.

Photoshopping a fake conversation that frees you from guilt doesn’t seem like an action that someone who is actually innocent would take. We aren’t giving all the details of who, how or when because its up to the victim to do that publicly when and if she wants to, but either way we don’t want anything to do with this band while this one guy is still in the band.

This is our choice to make and to the people who disagree, get fucked because I see plenty of “fans” talking shit on comment sections and maybe many of you are just huge apologists for one of the most vile types of human behavior on this planet but we aren’t. Sorry shit heads.

“I was raped by Cameron when I was 16. I tried to report it, and went to the ER, but things didn’t work out. Reporting rape is not as easy as people may think. Not only do victims have to retell the traumatic story over and over, but there is a big chance that there will be no justice.

Cameron says I’m lying, and people who experience rape should report it right away. I did try to report it right away, the records at the ER prove this, and no one pays for ER bills for something they make up. We were paying the bills from that visit to the ER for years after this incident.

I’m not a liar just because I used to cut myself when I was 16. People who cut themselves might want to take their own life, but there is no correlation to cutting and wanting to hurt other people directly. Saying that people who cut themselves are likely to make things up is a terrible thing to say about those who do suffer with suicidal thoughts. Wanting to take your own life is different then someone who wants to hurt others.

I have been suffering with thoughts of not being able to get justice, and worries that others may have went through what I went through. I wish that I could have prevented their suffering, because since The Faceless made this post, two other victims have come forward and said that they had a similar experience with Cameron. Who knows how many others there are. This is simply heartbreaking.

In Cameron‘s post about me, he never addressed the fake photo shopped screen shots that he took. He photo shopped words into my mouth before I even saw that he messaged me. When he was asked by his band manager to take a video of this supposed message, Cameron refused.

When I replied to him saying why did you photo shop words in my mouth, all he said was that he was going to get an attorney. Even his band mate, Ron, messaged me, and told me to lie or else he would get a lawyer. I attached this message for you all as well.

Why did IE post jokes on their page saying “they like to vape” when addressing these allegations? You know what “vape” rhymes with? It rhymes with RAPE. This should not be a joking matter. If someone makes serious allegations against you it should not be joked about, and they even had the nerve to say the allegations were “not as serious as they seem”. Somehow rape is not that serious. Okay?

Another thing that is heart breaking is all the victim shaming on this post and the Metal Sucks article. I am completely disgusted with these comments, and they are blatantly blaming the victim for everything. It is not my fault that this happened ten years ago, and when I did try to report it things did not work out. I knew Cameron long before IE.

I met this guy over a decade ago, and had no sexual interest in him what so ever. Stop victim blaming, everyone victim blaming is making the metal subculture look bad. You guys wonder why the metal heads in all the movies are the bad guy? It’s because of people like that- victim shaming.

So many people are saying why wasn’t this reported or taken to the police- it was. Justice in not just magically served, the judicial system and hospitals are not perfect.

Another thing about that- to all of you victim shaming and saying horrendous things about me, and then saying I should report it: you wonder why people don’t report it. It’s people like you, doubting victims, shaming them, saying I asked for it, and blaming me, that make people afraid to come forward with rape allegations and charges.

It is this kind of behavior that scares women from reporting rape. Everyone who victim shamed here is part of the problem. Those commenters are the reason why people don’t report this. All this hatred will tear apart any strong person.

I don’t owe you an explanation, I’m only posting this to prove that the members of The Faceless are good people, and that this is 100% real. They did not turn their backs on me and carry on. They actually took action and did the right thing, and that, I want to thank you all for. Thank you.”

Porras has since tried to defend himself with the below statement:

“Hey everybody I wanted to clear the air about whats been going on with us and The Faceless.

I want to preface this whole thing by saying I am 1000% against rape. It’s one of the most heinous things a human can do to another human that leaves life long mental damage and I wouldn’t nor couldn’t bring that kind of harm to someone. Anyone who knows me I’m sure will tell you that I’m a gentle person who doesn’t like confrontation and all I want is to make people happy.

Our band theme is all about spiritual growth and love that’s who I am. I know exactly who I am and will not let something like this change my outlook on life. I have never been to jail, never been to juvenile hall, never a violent crime, nothing. It’s all public record so feel free to check.

If you or someone you know has been raped PLEASE PLEASE PLEASE GO TO THE POLICE IMMEDIATELY. That is the only way to achieve justice in a situation like this.

This situation has nothing to do with Ron or Scott and I’m sorry to them that they are lumped in with this situation.
So the story begins 10 or 11 years ago when I was in high school. My friend had a girlfriend who was really mentally unstable and would cut her wrists quite often and be sent to psych wards (There’s nothing wrong with that I have many many friends who deal with mental trauma daily.)

One day my friend calls me and tells me that she is telling everybody that I raped her. He also mentioned that she accused several other people around the same time. Him being my close friend since middle school did not believe for a second that I did because he knew both me and her very well.

At the time I told her the same thing I’d tell anyone in that situation, that she needs to go to the police if she was raped. It’s not a joke. It’s not some game. It’s a serious thing that cannot be taken lightly. She never did anything and never contacted me again and after her and my friend stopped seeing each other I never saw her again.

Now flash forward to yesterday morning. Ron wakes me up telling me that this girl is making allegations again to the faceless and I tried to explain myself but in todays world it doesnt seem to matter what the truth is, even an allegation is grounds for you to lose great opportunities.

This girl happens to be friends with ken from The Faceless and so they seemed to immediately want jump on the opportunity to blow up this literal high school drama on the internet 10 years later. I really wish that they would have handled it like adults because it’s not fair to any of the parties involved and especially its not fair to the many many women out there who really have been raped.

I refuse to entertain the faceless‘s detective fantasy. It’s not their place and they should be ashamed of themselves for taking away power from someone who has a real accusation. The police will help you, the faceless will cause an internet shit storm (which is all she wanted in the first place)

Situations like these really show you who really knows you and has your back and I’m lucky to have good friends who stand by me. I will not let this women destroy who I am. I will continue writing music about love, growth, and understanding. As a free thinking person myself I implore all of you to think for yourself and not get caught up in this whirlwind of hate.

This will be my only public statement about this situation because I do not want to feed my positive energy into such a petty drama. It hurts my heart to think that someone out there may think it’s true =(

So like I said if you or someone you know was raped or abused or anything at all please seek justice immediately, it’s the best way to get actual evidence that will help your case. Just talking shit online is not the way to handle business and it’s harmful to our growth as a society.

I wish you all the best. Please be good to each other. We are all in this world together and no one deserves to be hurt.