KISS will be releasing a 40th anniversary super deluxe edition of “Creatures Of The Night” on November 18. Pre-orders can be found HERE.

The following was said about the set:

“The ‘Creatures Of The Night 40’ super deluxe boasts 103 total tracks with 75 tracks being unreleased. Newly remastered on CD 1, the original album has never sounded better. CDs 2 and 3 feature 34 demos, rarities and outtakes, including previously unreleased gems such as ‘Deadly Weapon (Penny Lane Demo),’ ‘Not For The Innocent (Demo)’ and ‘Betrayed (Outtake).’ CDs 4 and 5 highlight 26 incredible, soundboard live recordings from the “Creatures” ’82/’83 tour and seven super-rare tour sound effects, all recorded and archived by the “Creatures” tour sound engineer Harry Witz. The Blu-ray Audio disc showcases a first-ever Atmos and 5.1 surround mix from the original album multi-tracks plus the high-resolution newly remastered 1982 stereo mix of the original album. Additionally, the super deluxe box features an extensive array of bonus kollectible KISS memorabilia and ephemera.” 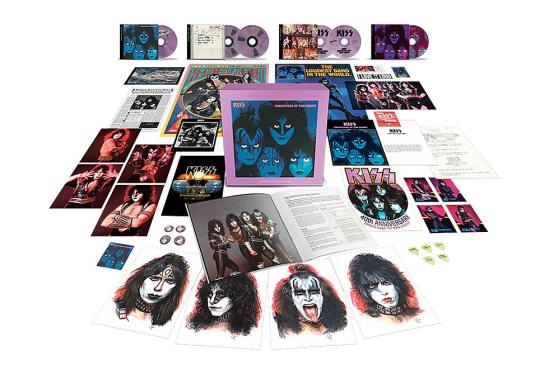